We take you through the potential happenings in the penultimate round of fixtures before the winter break in Ligue 1.

Antonetti’s men play host to an out of form Valenciennes side this evening. Both sides’s performances so far this season have seen them occupy top 10 positions in Ligue 1; something which many pundits failed to predict at the start of the campaign. Romain Alessandrini has been a revelation for Rennes, while the forward partnership of Le Tallec and Danic for Valenciennes has created the possibility of a very memorable season.

Danic despairs during Valenciennes’ defeat at the hands of PSG. (Courtesy of Ligue 1)

After being thrashed at the weekend at home to Lorient, Marseille got back on track with a gutsy win over Bastia in midweek. The return of prolific striker Andre-Pierre Gignac is a big positive for Baup’s men. Marseille’s apparent inconsistency is a big issue in terms of the title race. Meanwhile, Toulouse have some what faded away since their promising start to the season. Their dependency on Ben Yedder for goals has become apparent, and when he does not perform, neither do Toulouse.

Montpellier are finally improving. Despite having a torrid Champions League campaign, the Ligue 1 holders have managed to turn around their bad performances, mainly thanks to the likes of Remi Cabella and goalkeeper Geoffrey Jourdren. Meanwhile, the newly-promoted Corsicans have admirably negotiated their way through a third of the Ligue 1 season unscathed. Credit must go to manager Frederic Hantz for this. They will certainly fancy a go at Montpellier on Saturday.

Nice are the in-form side of Ligue 1 at present. Claude Puel has managed to turn them from relegation candidates to top 10 hopefuls in a matter of weeks. Goal machine Dario Cvitanich is getting all the praise, but David Ospina has been excellent in goal too. Nice will expect to take another 3 points when they take on Evian at the weekend. Evian on the other hand are struggling. They may have beat Troyes in midweek but were hit with uncomfortable news that they would be losing to key players in R.Mohammed and John Mensah in January/February to Ghana’s African Cup of Nations squad.

Dario Cvitanich has been a revelation for OGC Nice. (Courtesy of Eurosport)

These are difficult times for Reims. They sit precariously just above the relegation zone, 1 point separating them from 18th. Their lack of a proven goalscorer is something they will have to look to change in January because, otherwise, they will have a very difficult time staying in Ligue 1. Lille have hardly had a great couple of weeks either. Their sensationally poor efforts in the Champions League and star goalkeeper Mickael Landreau’s walkout have left Rudi Garcia worrying for his job. Lille need to start putting a run together or Garcia is gone. 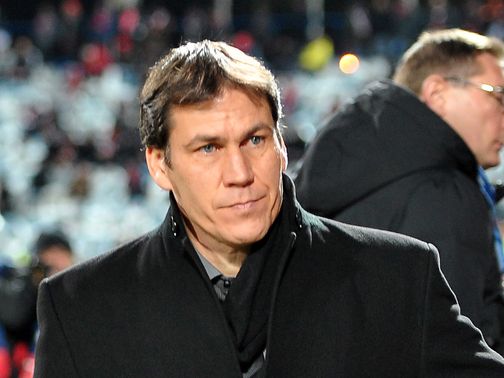 Rudi Garcia has had better days at Lille. (Courtesy of sportinglife.com)

All eyes will be transfixed upon this massive relegation clash. Two sides which lack sparkle and desperately need to grab points wherever possible. A positive for the home side is that striker Privat looks to be a good player and perhaps a reliable goalscorer, something that will certainly be useful in the months of struggle to come.

A potentially pivotal game for Troyes who will uncomfortably admit that the gap between the rest of the pack and Nancy and themselves is becoming all too large. The good news for ESTAC is that their new signing Sylvain Monsoreau is contention to earn his first start for his new side. Ajaccio are looking comfortable in around the mid-table area and will fancy themselves in this one.