Adil Rami and Valencia: The Beginning of the End? 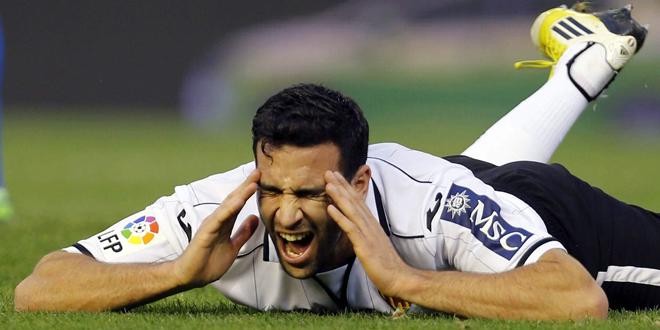 Frenchman and centre back Adil Rami has recently been shut out of the Valencia squad, transfer listed and told that he will never play for the Spanish outfit again. Spanish correspondent Tom Benton details the saga in full:

This follows his recent remarks on Valencia’s new coach Miroslav Djukic. According to reports, the French international spoke on Spanish radio station Cadena SER, and commented about the club’s current situation and his relationship with Djukic without asking the permission of the club.

He was subsequently removed from the squad for their match against Granada, and has since been shut out completely. Djukic commented and said that he considers the actions of the player to be a very serious offence. This incident occurs after a summer fuelled with speculation about Rami’s future at the club. He claimed in the summer that he was not happy and he wanted a move.

However, he failed to hand in a formal transfer request, suggesting he may have been convinced by the plans of president Amadeo Salvo and Djukic, who himself was a centre back and a Valencia club legend.

Valencia have had trouble like this before. For example, last year, with the case of Fernando Gago, who was expelled from the team and loaned out in the January transfer window before making a summer move back to his native Argentina. As for the situation with Rami, there are contradicting rumours that he has now been transfer listed but also that he is available for loan come January.

Valencia have already begun looking for a replacement for Rami, and it is believed their number 1 target is Napoli centre back Federico FernÃ¡ndez. Valencia’s president Salvo recently came to England in order to meet former manager Rafael Benitez, while he was visiting Arsenal with his Napoli side. Reports suggest they met but the Napoli manager supposedly explained that he had no interest in taking the Frenchman on loan.

Rami has spoken out and said he disagreed with Valencia’s decision to sanction him and send him home. But he has also said that he is sorry for the situation and wanted to apologise especially to the club’s fans, who have always treated him with the ‘upmost’ respect and true loyalty.

Since Rami’s comments he has also met with Salvo in order to tell him his version if events. There are rumours emerging that he will be allowed to return to the club and train after being suspended without pay for one week, but the club are still looking to sell or loan him out in January. The Spanish outfit released a statement explaining how Rami and the club were seeking a solution together and that he had expressed his regret on the comments he made. Rami had a troubled start to this season, as well as Valencia, as they lost three successive league matches and their shock home loss in the Europa League to Swansea.

Rami was sent off in the 9th minute for a foul on Wilfried Bony, and this was the last time he made an appearance for the club. However, since then, the club seem to have turned their fortunes around, and they have won three league games in a row.

The incident doesn’t seem to have affected the players on the pitch, but off the pitch, it might be a different story. Striker Jonas stated that he was ‘sad’ about what has happened to his close friend Rami, while manager Djukic has said that all further decisions are now down to the club as he focuses on managing the team.