Abou Diaby: On the road to comeback again? 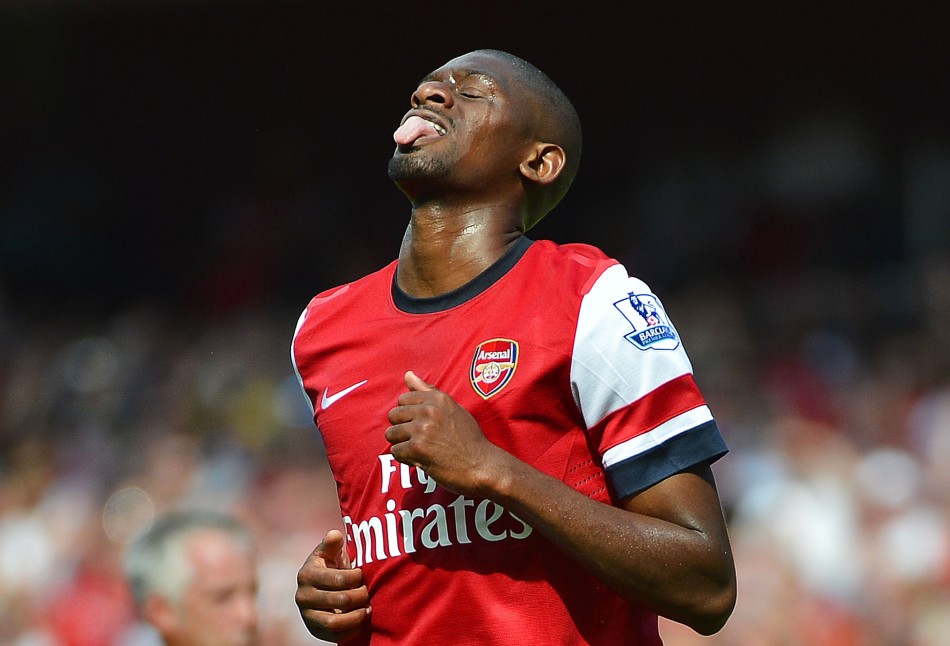 Few would have predicted Arsenal’s impressive rise to the top of the Barclays Premier league, especially after a 3-1 loss to Aston Villa on the opening day of the season. Despite the arrival of German superstar, Mesut Özil, and the rebirth of Aaron Ramsey, one midfielder has battled away with injuries since his time at the club began and is yet to play this season. Abou Diaby has been unable to feature as regularly as he, the fans, and the club would have liked. Since his arrival from AJ Auxerre in 2006, Diaby’s track record with injuries is less than impressive; Arsenal fans will feel that, although he has only made 123 appearances for the club, they have seen glimpses of just what he is capable of. An anterior cruciate ligament problem is the latest in a long line of injuries suffered by the Frenchman, but a possible return to action has been pencilled in for Christmas time.

Abou Diaby is of Ivorian descent and was born in the 10th arrondissement of Paris. However, his upbringing took place in the Paris commune of Aubervilliers. His career started with the communes’ local club, CM Aubervilliers. He joined Red Star Paris in 1998 aged just 12. Only one year later, Diaby was selected to attend the highly prestigious Clairefontaine academy that has produced hugely talented footballers in its past. It continues to develop players and help keep the conveyer belt of talent alive in France. He continued to play for Red Star alongside his attendance at Clairefontaine and did so for four years. Diaby’s stay in Paris was prolonged as a new project unfolded, this time with the capital’s Ligue 1 club, Paris Saint Germain. However, his time with PSG was short lived and due to an administrative error, he joined AJ Auxerre’s youth academy. Diaby made his professional debut for the club in the 2004-05 season and also played in the club’s UEFA Cup campaign.

Diaby joined Arsenal as a 20-year-old, signing a long term contract for an undisclosed fee during the winter of the 2005-06 season.

Standing at 6 foot 3 inches, Abou Diaby is one of Arsenal’s taller players. Despite the presence of the diminutive figures of Jack Wilshere, Santi Cazorla, Özil and Ramsey, Diaby’s height and strength offers an alternative to the footballing nature of the aforementioned quartet. He possesses the ability to break up play, while also offering an outlet in advanced positions. His close control and quality on the ball allows him to take on the opposition with relative ease. His box to box qualities mean he is also able to dictate the tempo of a match. During his time with former club, Auxerre, Diaby drew comparisons to former Gunner, Patrick Vieira.

In the absence of Lassana Diarra at the 2010 World Cup in South Africa, Abou Diaby was given the opportunity to represent France at a major tournament for the first time. Thanks to a relatively successful season in 2009-10, making 40 appearances for the Gunners, Diaby was included in the line up for opening match against Uruguay. This came as a surprise given the presence of Jeremy Toulalan and Yoann Gourcuff in the squad. He had only featured from the bench in the warm up matches prior to the tournament, but Raymond Domenech gave Diaby his first taste of World Cup football. The Arsenal midfielder won many plaudits for his performance against the South Americans, and was, in turn, awarded the Man of the Match accolade in French sports paper L’Équipe. Even with the falling out of senior figures within the French squad and the fury that engulfed the camp, Diaby’s career reached a new high. He was regarded as an important player upon his return to Premier League action but, once again, fell victim to more injuries. He has been unable to replicate the form and number of performances ever since.

Diaby has suffered almost 40 separate injuries including previous knee problems, calf, thigh and groin strains as well as ankle and foot injuries. This will almost certainly beg the question as to what could have been had he not been dealt such cruel luck with injuries.

In a recent interview with L’Equipe, the Frenchman has revealed that he is looking to take his rehabilitation slowly with the aim of returning in December.

He told the French paper: “I have come off the crutches. Now I have to start walking again!”

“I will starting running again in a few weeks.”

“I want to take my time with everything to ensure that it all goes smoothly.”

Diaby has previously been rushed back into the fold prematurely, leading to further complications and resulting in yet more injuries. However, should Diaby take his recovery slowly and return to playing and staying fit, then the Frenchman will give Arsène Wenger a welcome boost in the midfield.

Wenger has remained supportive of the 27-year-old during his times of difficulty. His confidence in the former Auxerre youngster was such, that he allowed Alex Song to join Barcelona. However, Diaby only made 11 appearances and his 2012-13 campaign was cut short due to numerous injuries.

Wenger has a close relationship with Diaby, who he has managed for seven years, and feels that he deserves much more than has been the case in years gone by.

“Diaby has a very serious life, he doesn’t drink, doesn’t smoke, doesn’t go out, and is very conscientious in training. So you always feel sorry for him, so you always touch wood it will go well for him. Honestly, what he has gone through is unbelievable.”

The Gunners boss continued in his praise for the midfielder and has suggested he will remain patient during his time in rehabilitation.

“If you love football and you see a player like Abou, you want him to have the career he deserves, especially when he has the attitude that he has. You have to have patience. Because what did he do wrong? Nothing. You have to give him a chance.”

Diaby hasn’t had the ability to make a midfield berth his own in his seven years with the Gunners, but he will be hoping his fortunes will take a turn for the better come 2014. A return to the first team looks as though it could take place in the New Year and, should he stay fit, could possibly work his way into the plans of Didier Deschamps for the European Championships in 2016.

Bafetimbi Gomis may yet sign a contract extension after all