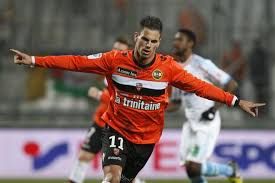 Jeremy Aliadiere appears to have squashed speculation linking him with a move away for Lorient, by telling the media that he is not interested in England:

“In my whole career, I could never play more than three months in a row. This season I have played 90 minutes during almost all the matches.  I don’t want to get any rest, I don’t want to lose my dynamics. It is unbelievable I feel like I am dreaming.

“Back to England? I am talking with my agent and my idea is not to go back there.”

There has been talk about Aliadiere getting a call up for the French national team due to his brilliant form and the lacklustre attitude of Karim Benzema. It has also been suggested that if he did not receive this, which would, in my opinion be most likely, he would play for the Algerian national team. Aliadiere had this to day in the matter:

“Algeria? I have not refused because I don’t deny my origins, but I have never been to Algeria.

“Les Bleus? I am thinking about it more than before, because I never thought about it. One year ago it was just impossible.”

Aliadiere has changed his tune from comments a few days ago when he appeared to open the door for a move:

‘I have talked with my agent and I’m not just going to go to England like that, I want Champions League football.’

‘I knew that this season I would shine and I have.’

However, reports are that his wife is unhappy in France and wants to return to England. He had been linked with the likes of Newcastle and as much as many fans do not want this to be true, having watched the player in England before, Aliadiere has really shone this season and has scored some fantastic goals.

All in all, he is unlikely to attract a top club this summer, as despite his rich vein of form this season, he is still very unproven as this is the first season where he has really played consistently well. We shall have to wait and see, but his manager, however, does appear to think that a move is a possibility: If Aliadiere stopped conflicting his original statements, we might know more!

Christian Gourcuff: (Lorient Manager) ‘It would be a big disappointment if we lost Aliadiere, but I don’t think many Ligue 1 clubs can afford him.’

President of Lorient Loic Fery has recently come out on radio to say that Aliadiere is staying put.

VOTE: Ligue 1 Team of the Year: The Defenders