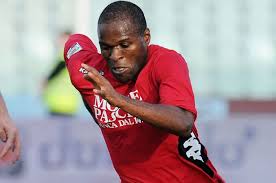 Yesterday, the Italian club Livorno claimed on their official website that Innocent Emeghara had joined the club on loan. It appeared to be the end of a saga which has linked the Lorient player all over Europe, but Lorient president Loic Fery was not done yet…

To the surprise of everyone, after thinking the Emeghara-Livorno deal was as good as done, Fery announced on his Twitter page that the deal was ‘not done’ and that Emeghara was ‘still owned by Lorient.’ The player was not bought out by Siena, where he spent the majority of last season, scoring 7 goals in 17 games. As if this was not surprising enough, he then went on to say that ‘Emeghara is heading probably to the Premier League.’ Premier League fans, who just a few hours previously thought they had missed out on a quality player, were now given another ray of hope.

We, Get French Football News, understand that talks between Emeghara’s camp and Premier League club Newcastle took place earlier this week, and although we cannot confirm that this is where he is going, at this moment in time it certainly looks the most likely. Among the other clubs linked with the Swiss striker were SPL champions Celtic, but, if Fery is to believed, Innocent Emeghara will be plying his trade in the 2013-14 season south of the border.