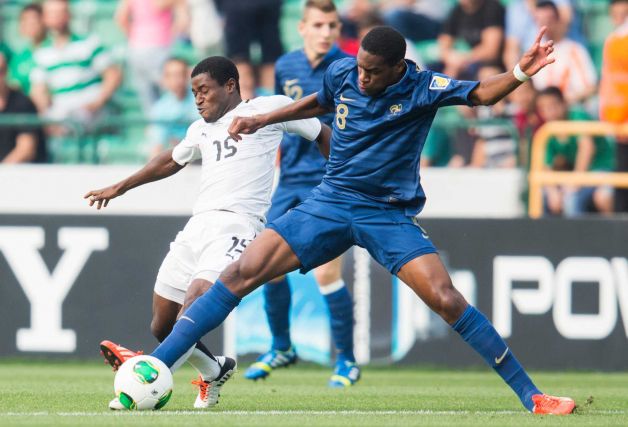 He is one of the highest rated players out of all of France’s brilliant youth and has been a star thus far in allowing France U20s to reach the World Cup Final. Sevilla midfielder Geoffrey Kondogbia has had a wonderful season and looks set to be rewarded with a move to a big club. The likes of Chelsea and Real Madrid had been linked, but now Sky Sports are saying that Arsenal are ready to pounce.

This is unconfirmed as yet, and as Sky Sports make out, is still in the very early stages with no contact made. Kondogbia, as mentioned is currently in Turkey, and like so many of his team mates there, he has a big decision to make when he returns as his future is in doubt. Kondogbia has admitted he has a decision to make, but has been very cagey on what will happen:

“I am flattered to be linked with Real Madrid. They are a top club, but Sevilla are fantastic for me at the moment.”

“Chelsea are also a great team with a great manager, so let’s wait and see what will happen after the World Cup.”

As you have noticed, Arsenal have not been mentioned, but this was said before the U20 world cup and Wenger is known to scout youngsters in such competitions and has probably seen Kondogbia that way as well as whilst he was checking up on his French team-mate and Arsenal’s new signing Yaya Sanogo.

For one, I seriously could not recommend Kondogbia highly enough. He is powerful and is very good at bringing the ball forward into attacking positions having made interceptions. He has provided goals and assists for the French U20s thus far, but it is a case of whether other clubs such as Real Madrid pursue their interest, because in that case he will surely choose them instead of Arsenal.

It is still very early days, but if Arsenal are able to secure his services, it would be a fantastic signing of one of football’s best prospects.

(FFW’s Scouting report of him)