January: the month of unmatched optimism. As we burn off them extra pounds and manage to maintain our New Years resolutions (to the end of the month at least) the Ligue 1 campaign shakes off the lingering frost and shifts back into action. If there was a one man in need of the 2 week break then that was most certainly Christophe Galtier. The puffer jacket fashionista witnessed his team fall from as high as 3rd to a miserable 10th in the month of December. Worse still AS Saint-Etienne were thoroughly unwatchable as they recorded a grand total of 0 goals and conceding 4 in the space of 4 games. If Galtier made a resolution this year it was surely that his side returned to form and that they showed the style and flair displayed earlier on in the campaign.

Week 20 can be a harsh week for top-flight French clubs due to not only the transfer window but the biannual Africa Cup of Nations. Luckily, this year both have been relatively kind to ASSE. The loss of Max Gradel (who’s representing the Ivory Coast in South Africa) and Faouzi Ghoulam (Algeria) could have been a lot worse but for a bit of shrewd business. The acquisition of Yohan Mollo from Nancy not only provides cover for Gradel’s absence, but also could inject a new flash of life into the camp.  Mollo is by no means a top signing but he is without question a bright and lively player that can provide a threat out wide.

If rumours are to be believed the interest in a certain forward from a Tyneside club could well put a spanner in the works of any kind of revival. It’s no surprise that Pierre-Emerick Aubameyang has popped up on the list of ‘possibles’ from clubs across the channel. The Gabon forward has after all grabbed himself 8 goals so far this season as well 4 assists and a handful of Man of the Match performances. Without a doubt there would have been a large sigh of relief from the manager when P.E.A’s Gabon side failed to qualify for this year’s Africa Cup of Nations but such sighs may be cut short if the looming shadow of the Premier League northerners furthers it’s advance. Positivity is key though and there is no doubt that Galtier will be keen to silence any negative uncertainties as soon as possible. After all he has the small matter of Sainté’s impending game with Toulouse FC to concern himself with.

Although ASSE find themselves winless and goalless in the last 5 league games Toulouse can hardly boast a much better record with 3 defeats, 1 draw and 1 win in the month of December. Though their win before the break is most certainly a positive it must be said it came after putting an extremely poor FC Sochaux-Montbéliard to the sword 2-0. Like ASSE then, a win is a must (Toulouse themselves are only a point behind ASSE in 12th) but also like the boys over at Stade Geoffroy-Guichard there is reason to be positive. Toulouse themselves only lost Aymen Abdennour to the impending tournament in South Africa as well as bringing in a single signing so far in the form of Zaniou Sana. Front man Wissam Ben Yedder is never short of admirers and his 9 goals so far this season have been key to Toulouse’s brighter performances. Moroccan Adrien Regattin, who hasn’t made the trip to South Africa is also a familiar face that Casanova will turn to in his search for points. 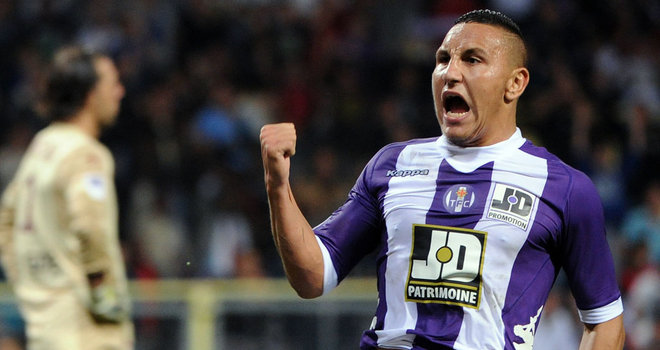 Regattin has been a bright spark for Toulouse thus far.

It’s difficult to separate the teams on form or activity over the last 2 weeks and this game may well come down to who’s benefited from the break the most. Both sides have goal scorers in their ranks, see Aubameyang and Ben Yedder and both boast players that can create an opening, see Hamouma and Regattin. This battle then, may well be won in the middle of the park and if that is to be the case ASSE may well have the advantage.

Although the flair and creativity of others is rightfully praised, the work rate and unfussy approach of Josuha Guilavogui sometimes can go unnoticed. The France Under 21 international may never make the headlines but it’s his solidity that Sainté should look to build on. His presence both physically and in terms of appearances has been an constant this year and although his contribution in terms of goals or key passes are low; the platform he builds to allow the forward thinking players to do what they do best is commendable. His basic approach may not be what ASSE’s fans want at the moment especially with their lack of goals, but Guilavogui still has the ability to boss a midfield and will have to do so on Friday if Saint-Etienne hope to gain an advantage over their visitors from Toulouse.

In all honesty the game has goal less draw written all over it but there’s still cause for optimism. Both sides will be desperate for a positive performance, as well as a good result and hopefully that should lead to a more open, attack minded game. Even though the promise of width, glitz and glamour lay just under the surface for these two sides; the basics for both sides need to be revisited and improved upon before their early form at the beginning of the season can be regained.