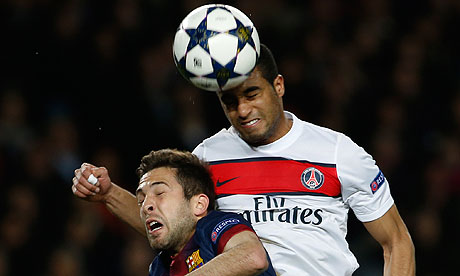 So PSG’s Champions League journey came to end last night at the hands of a Lionel Messi inspired Barcelona side. Here are our player ratings:

Victor Valdes 8
The Spaniard was extremely solid in goal for Barca, expertly denying Moura and Lavezzi with their guilt-edged opportunities. There was very little he could have done to prevent Pastore’s goal. Led from the very back for Barca.

Jordi Alba 7
Was impressive going forward, supplying several balls into the box and beats Christophe Jallet on several occasions. Defensively, he had his hands full but generally coped well with the obscene pace of Lucas Moura. A rare ugly piece of simulation from the young Spaniard towards end of the game did somewhat sully the mood though.

Adriano 5
Not a traditional centre back and that really showed. His inability to play in that position showed and was perhaps lucky to see on yellow for his challenge on Lucas Moura in the 1st half. Came off around the hour mark after pulling his hamstring.

Gerard Piqué 6
It was clear that Piqué is at the top of his game at this moment of his career. He did well to contend with Ibrahimovic, but made some embarrassing mis-passes in the 1st half which nearly led to goals for Lavezzi.

Dani Alves 3
Alves was the worst player on the pitch last night. There were countless examples of mis-passes, mis-controls and, worst of all, the amount of horrendous shooting chances he managed to waste. Another player perhaps in decline for FCB.

Sergio Busquets 6
On the face of it, Busquets seemed invisible. He worked hard, and managed to strangle the central midfield of PSG from going forward. However, with PSG deploying a 4-2-4 going forward he was largely powerless to stop their attacking moves. Ineffective, but did just about enough.

Xavi 8
Another extremely impressive performance from the timeless central midfielder. He had a 100% passing completion record last night, a record since Opta began covering the Champions League. Played a part in Pedro’s goal too.

Andres Iniesta 8
This man work absolutely tirelessly in a slightly more attacking role than he usually prefers to play in. His persistent look to create chances coupled with an outrageous piece of skill to swivel past Jallet in the closing minutes of the game certainly showed the Spaniard played his part.

Pedro 8
For much of the 1st half, the left winger was Barcelona’s most potent threat going forward. He exploited Jallet’s deficiencies and capped off his display with a fine goal which put Barca into the semi-finals.

Cesc Fabregas 4
His relatively uninspiring form seems for Barcelona this season continued last night as he was unable to offer anything of note going forward for his side. Countless awful efforts on goal and misunderstandings with teammates saw him substituted for Messi.

David Villa 4
At least Fabregas was trying to impose himself on the game. David Villa
A remained transparent throughout the game and could rarely muster up the interest to run at the PSG defence it seemed.

Marc Bartra 7
Actually impressed when he came on for Adriano. Seemed a better option, was more assured on the ball and made some decisive headers to keep out PSG towards the end of the game.

Lionel Messi 7
Lionel Messi’s presence changed the game for Barcelona, but not what he actually accomplished on the pitch. Yes, he played a pivotal part in Barca’s goal, but was otherwise fairly quiet. I all fairness, it was clear for all to see that he was not fit yet he still made the difference.

Alex Song 6
Wasn’t on the pitch long enough to create an impression.

Salvatore Sirigu 6
The Italian actually had fairly little to do, mainly because the vast majority of Barca’s shots were way off target. However, he was caught off guard with Xavi’s early free kick and was powerless to stop Pedro’s goal.

Maxwell 7
The former Barca player gave a very solid performance down the left, albeit perhaps aided by the terrible performance from Alves. He looked to help going forward whenever he could.

Alex 8
First to every ball mentality really shone through yesterday. He made some impressive last ditch tackles and defensive headers, especially from corners. Needless to say, he was ineffective in the centre forward role he took on in the closing minutes of the game.

Thiago Silva 7
Under his leadership his side only conceded 1 goal against arguably the best team in the world at their place. He was omnipresent without really doing anything of note.

Christophe Jallet 4
Jallet tried his best, unfortunately it was not good enough. Alba and Pedro tormented him time and time again down his right hand side and he was humiliated by Iniesta who pulled off an outrageous skill on him at the end of the game. He offered very little go forward too.

Marco Verratti 8
Verratti certainly filled the massive shoes that Blaise Matuidi had left him last night. He was all over the pitch, quelling the Barca attack and breaking it down at every opportunity.

Thiago Motta 6
Perhaps lacked the crispness that his defensive midfield partner possessed yesterday and was more at fault for the Barcelona goal but he was a creative spark. Many of PSG’s counter attacking moves stemed from his input.

Javier Pastore 7
Had one of his better games last night in a PSG shirt, got the goal which gave his side the hope they so desperately craved but turned villain shortly after when he should, have passed to Ibrahimovic and instead blowing their best chance of the game to win the tie. Bright on the ball though.

Zlatan Ibrahimovic 6
The night that the big Swede was supposed to lead by example and take Les Parisiens to the semi finals saw him fall generally short of expectations. He was unable to have e desired impact on the game he might have wanted because he had Piqué to contend with. He was lively but not he did not give enough.

Ezequiel Lavezzi 6
His work rate was exemplary, his finishing was not. He squandered some excellent chances in the first half which, had he put away, would have probably altered the overall outcome of the game. Frustrating night for him.

Lucas Moura 8
His lightening pace and determination on the ball certainly earned him the man of the match award for the first half. However, in the second half he was unable to demonstrate his qualities and his performance level dropped off. Still what a prospect for the future.

Kevin Gameiro 6
Came on towards the end of the match and was ineffective in trying to find PSG the winning goal.

David Beckham 6
Came on very late, and, although he didn’t put a foot wrong, was involved in some foul mouthing of the referee earning him a yellow card.

Ben Arfa interview with ‘The Chronicle’