Ben Arfa interview with ‘The Chronicle’ 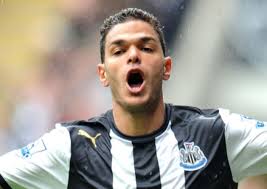 Frenchman Hatem Ben-Arfa dismissed speculation linking him with a move away from Newcastle and spoke of his disappointment of exiting the Europa League. The interview from the ‘Chronicle’ is here:

Ben Arfa had been linked with a move to PSG after an interview with BeinSport, but with a heap of French talent beside him on Tyneside, he now looks set to stay for next season at least.

“Everything is here. It is a great club. We have a great squad, big ground and great fans.”

Newcastle went out of Europe last night, but the player has not given up hope of playing in the competition with Newcastle again shortly.

“We have a great team. I’d love to play for this team in Europe again. We won’t next season but after that we can maybe go again, and do like last year.”

“We have had a good Europa League tournament. It is very important Newcastle come back to Europe and play at a high level. We can be disappointed, the first game we had a lot of chances. We hit the post twice through Papiss. We had two goals disallowed in the second leg. Maybe we could have had a penalty which wasn’t given. There were a lot of chances.”

VIDEO: Kevin Gameiro’s Frustration at Being Substituted vs Troyes (14/04/13)