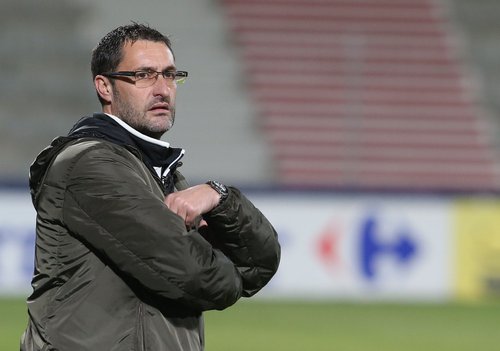 When Stephane Rossi took over his hometown club ten years ago it would have been hard to imagine preparing to face clubs such as Auxerre and RC Lens both of which have won Ligue 1 within the last sixteen years.

Rossi had previously played for both Bastia based clubs in his youth, however he couldn’t join the elite cast including Roger Milla, Michael Essien and Alex Song who have graduated from Sporting Club to become international stars.

Whereas Rossi’s path led him to Cercle Athletique Bastia where he played between 1984 and 1986, his comeback to the club in 2003 has seen the side progressively advance through the lower leagues and after six seasons in CFA 2, in which they narrowly missed out the season previous, reached the third tier of French football in 2011 after topping their group leader board.

Fortunately for the club and their army of fans they have a potent striker in their arsenal that arrived from the small club on the French Riviera, Hyeres in 2010.

Romain Pastorelli has become the spearhead of CA Bastia’s ascent up the French football ladder – notching thirteen league goals in his debut season was a sign of things to come.

This season will be Pastorelli’s first taste of Ligue 2 football after plying his trade in National 3 and 4 and at 30 years old his career has really been kick started by Stephane Rossi.

The Le Noir faithful will be pleased to see their star man has agreed a new deal to stay with Corsicans for another year despite a verbal agreement with FC Metz.

It’s key to consider chairman Antoine Emmanuelli’s decision to stick by his manager for so long, the longevity of Rossi’s role is one of the main reasons behind their rapid rise to within touching distance of Ligue 1.

It was always going to be a long journey to reach this point but Emmanuelli’s commitment to his man has proved fruitful.

The Corsican club have enjoyed three promotions in consecutive seasons which has attracted much attention but the manager is trying to remain holistic revealing nothing will change despite their promotion to Ligue 2.

Rossi admitted it’s important to stick to the values and the state of mind that has taken them this far. He also pointed to playing with humility and love of the shirt as the most important factors for CAB to be successful.

The spirit in the squad is something the coach stresses is of paramount importance and with his team taking 16 points out of possible 24 in their last eight games, including a last day win proved just how cohesive his team had become.

Although this could have all been in vain if Frejus had avoided defeat at mid-table Red Star.

CAB had to defeat the champions Creteil, who they had lost to 2-0 earlier in the season and even fell behind in the decisive game. Nonetheless, the man who at times singlehandedly kept them in the promotion chase, stepped forward once again to write history. Pastorelli netted twice to seal an unlikely win and with Red Star triumphing over Frejus, Rossi’s side had achieved the unthinkable.

In the off season the 49 year old has focused on a defence that leaked 51 league goals last campaign with new recruits such as central defender Mamadou Camara from Guingamp, Korean stopper Raphael Romey and Jerome Phojo on a season long loan from cash rich Monaco.

However, speaking in June 2013 Rossi pointed out the significance of retaining his squad and not disrupting the camp. He went on to say his aim was to keep 80% of his side together and add four or five new players.

Furthermore with the arrival of goalkeeper Antoine Phillipon who was on loan at Creteil last season and who more pertinently was in goal for that historic last game. As well as the signing of Christopher Vincent from neighbours SC Bastia takes the new additions to the five Rossi was looking for prior to the transfer window.

No one expects a fourth successive promotion, the infrastructure and financial means at the club just isn’t available. Despite constant redevelopment of the Stade d’Erbajolo which now seats 2000 the rapid augmentation of the club to relative prominence has prompted an agreement with ‘sister team’ Sporting Club to ground share at the 16,000 capacity Stade Armand-Cesari.

Regardless of economic constraints the team dubbed L’Escandron Noir will more than make up in spirit and unity which has been the base of their current success and with Stephane Rossi at the helm they have a man who is rooted in the clubs traditions and is a vital part of guiding the team through unchartered territory.