Ciao: Fabrizio Ravanelli: The Gamble that Failed to Pay Off 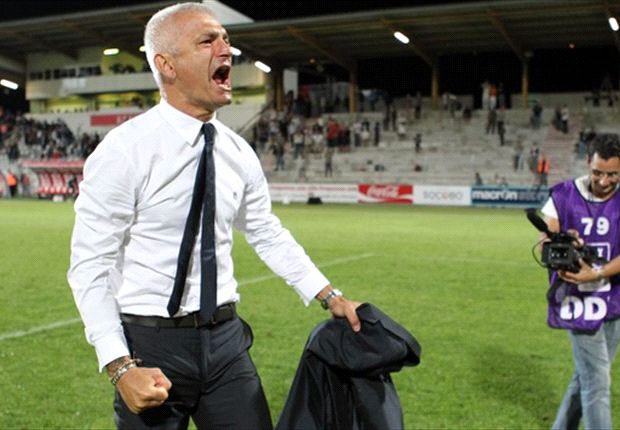 Last night, Fabrizio Ravanelli announced that he had managed his last game for Ajaccio in the post match press conference after just 13 competitive games in charge.

The flamboyant Italian who arrived on the little island called Corsica in June of this year still harbours dreams of managing Olympique Marseille one day: the club where he spent two years as a player; netting 28 times in 64 appearances.

Fabrizio Ravanelli: ‘Tonight was my final game in charge of Ajaccio. Sadly, I have been fired. It was the President’s decision.’

Having only managed a Juventus youth team beforehand, Ajaccio was Ravanelli’s first real venture into football management and that was frankly obvious in the way he went about his business on the touchline. Fiery and often overly-aggressive towards his players, Ravanelli was unable to earn their respect.

One simply had to look at the downtrodden faces of Ajaccio’s players as early as during their first game of the season at home to St Etienne to see how poorly they reacted towards Ravanelli’s consistent barking and yapping from the touchline. Being an authoritarian-like coach is one thing, abusing your players is another.

Although the majority of Ajaccio’s players refused to speak to the press about their respective relationships with the Italian, the cracks began to show as their Ligue 1 campaign took shape. There were strong rumours of a fight and eventual breakdown in relations between Ravanelli and his most potent striker Adrian Mutu, who is currently seeking a move back to his home country in the shape of Steaua Bucharest for the summer.

In an attempt to make some sort of stand, Ravanelli refused to pick Mutu for two of his Ajaccio squads after their reported bust-up but the Romanian was quickly back in action despite failing to score so far in Ligue 1 this season. Scoring was generally a serious issue for Ajaccio under Ravanelli who arrived in the summer wanting to improve the defence first. While Ajaccio may be more assured defensively this season after the good work done Giampero Vientrone, Ravanelli was only able to celebrate eight goals as Ajaccio manager.

This is undoubtedly no part down to their inability to find a goalscorer. Not a single player in the Corsican side’s squad has scored more than one goal in Ligue 1 this season. Last season, that responsibility was placed with Adrian Mutu. If manager and goalscorer had been on better relations one could argue that Ravanelli’s fortunes at this moment in time would be different.

In fact, Fabrizio Ravanelli only managed one win out of thirteen with Ajaccio and President Alain Orsoni has a history of making knee-jerk hiring and firing decisions which have often saved his club from relegation in seasons gone by.

Ajaccio find themselves 19th on 7 points after 12 games and whoever replaces Ravanelli will have difficulty in hoisting the side out of the relegation zone considering how low current morale is at the club. Ajaccio must find an experienced fighter of a manager who is equipped and able to deal with all manner of situations. As with so many years previous, Ajaccio’s fate lies in President Alain Orsoni’s hands.