Edinson Cavani: What to Expect if PSG Come for Him 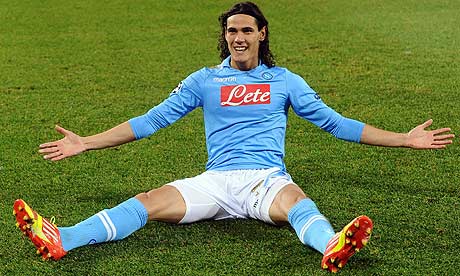 RMC have broken the news that PSG have agreed personal terms with Napoli’s main striker Edinson Cavani, who could be set to meet up with ex-teammate Lavezzi. Whilst we have no conformation on this matter, here are some of the best bits from the striker’s season:

A move for Cavani would probably suggest the Rooney speculation is false. It does, however, hint that Sky Italia might be on to something when they say that Ibrahimovic will go to Juventus. Whether PSG fans would swap Cavani for Ibra though is another matter. It could be a very interesting summer, as always in recent markets, at PSG, but this time with who they sell as well as who they bring in.

The ‘Daily Mail’ are also claiming that Manchester City have agreed terms with the player as well, so if this is the case, PSG are by no means certain to sign the player.

VOTE: Ligue 1 Team of the Year: The Midfielders