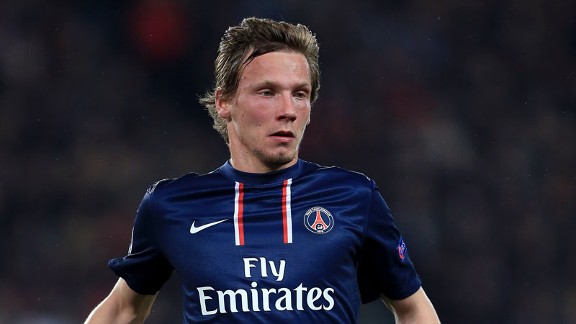 RMC Sport’s Mohamed Bouhafsi told the Get French Football News Show this morning that Premier League side Everton have a long history in terms of their interest in PSG’s central midfielder Clement Chantome.

‘Already when David Moyes was manager, Everton sent a scout to watch Clement Chantome and they liked him.’

‘When Roberto Martinez signed for Everton, the scout told Martinez that we have many possibilities for players to sign and one of them is Clement Chantome.’

‘Roberto Martinez has watched clips of Chantome on video and said something like ‘okay he is a very good player. I want him.”

‘For the moment Everton have not made an offer because they are trying to keep Fellaini and Baines.’

Mohamed went on to say that both Fulham and West Brom are also aware of the player’s availability.

Everton did not put a bid in in time, however, as Toulouse have now snapped the player up on a season long loan.

Arsenal bid for Cabaye rejected, but they also enquire about Kondogbia and Pogba say Sky Sports

Hervé Renard to Lucien Favre: “Given the enormous...

John Textor given until 7th December to complete...

France World Cup squad given a day off...