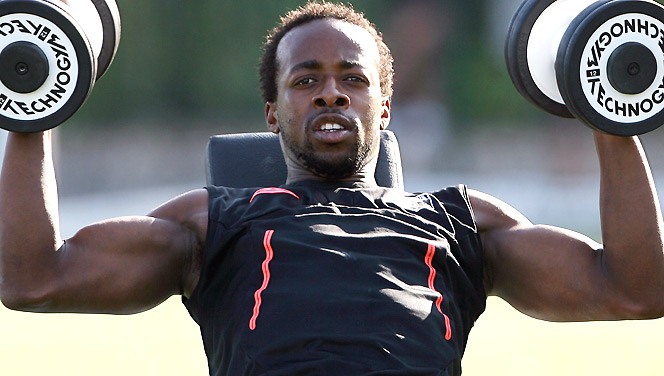 Get French Football News had the pleasure of chatting with French international Sidney Govou who is currently recuperating from a horrible injury about where his future lies as well as his views on French football as a whole:

1) Is it strange to be without a club at the moment?

No, that is the life of a sportsman at the highest level and for me my health is the most important thing!

2) Did you want to stay at Evian? What reasons did they give you for not extending your contract?

Nobody took the time to call me and explain. They were clearly too busy on signing other players. I hope another club disagrees with that view point.

3) Are you in discussions with clubs at the moment?

No. Some do ask me how my recovery is going from my injury and may offer me a contract if I hopefully return.

4) Do you have a preference as to where you want to go? England?

No not at all, but it is true England would be great.

5) You have had a fantastic career, what has been the highlight so far?

It is difficult to say honestly, but I will say the unpredictability of my career has made it a difficult question to answer.

6) What do you think of the way in which Jean Michel Aulas has dealt with the Bafetimbi Gomis transfer situation?

It is not up to me to judge the situation, I only am there to support my mate who is in a difficult situation. Beyond that, Lyon have to sell and I understand that but there is no need to expose that to the public at the detriment of a player! He still has the right to choose his destination.

7) Is there anybody you hate in football? You come across as Mr Nice Guy…

Of course I do not like everybody, far from that but I do not see the need to say so. I often find a way to forgive everybody and that makes me feel good. I have always carried myself in a very professional manner in my team; if there is someone I don’t like in that environment, I do not talk to them apart from about football and I don’t seem them outside of work! Life is simple! (he chuckles)

8) What is the difference between the environments of a national team and a club side?

In my experience, everything depends on if the group has a history or not. It is a difficult question to answer. But the biggest difference is the atmosphere and friendliness of one compared with the other. Also, there is the positional rivalry of players at clubs. It was a bit simpler for me during my time at Lyon, because during my first few years there was very little competition. National teams are great in my experience,  the best is a wonderful atmosphere with a lot of respect from player to player whatever club the player plays for! Hard to explain but there you go!

9) Finally, what are your view on the DNCG, Sidney?

I think it is a really really good thing. It is essential for football, but because in France we always want to set an example, we now need to advertise that to the rest especially to people who do not see things the way we do. We need to explain to supporters that it is important to run the clubs properly. It is of course difficult to compete with other top European leagues when they don’t have the same system of financial control as we do.