A man of the match display by Marseille man Valbuena put Les Bleus top of the World Cup Qualifying group, which also includes Spain. France play Spain in the week, in a crunch match, surely to determine who will top the group. France started and ended the game on top. They did what they needed to do in order to get the three points, but they were still unable to play the way they were capable of.

During the first half, the French spent much time queuing up on the edge of the Georgia box, but it took them the whole 45 minutes before they got the break through in stoppage time. Valbuena floated a freekick in, which the unmarked Giroud noded calmly into the bottom corner. Georgia, however, did threaten. Lloris had to make a few good saves in the first half to deny the underdogs.

The second half started how the last one ended, however, and that is with a French goal. Giroud held the ball up well down the flank, before crossing it to Ribery, who found Valbuena, who fired the ball into the top corner. It was a goal that the player really deserved and probably the pick of the bunch. Soon after, France made it three. A lovely ball over the top by Valbuena found Ribery who cut inside and fired it home at the near post. The keeper should have done better. 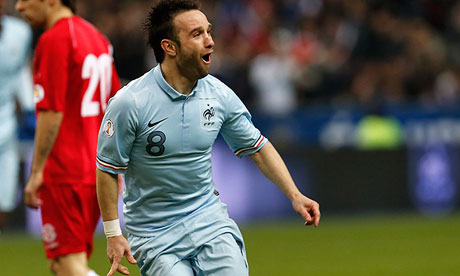 Valbuena celebrates his goal.
[The Guardian]

Georgia did not go down without a fight and did indeed get a consolation goal. A ball hit Sakho’s back and fell to Kobakidze, who was there to fire home. Lloris could have done better, but it was goal that the player deserved, having been Georgia’s main threat throughout the night. A draw between Spain and Finland at the same time, put France top of the group.

Lloris 7: Made a fine save off a Kobakhidze effort in the first half. Was largely untroubled. Should have done better for the Georgia goal.

Jallet 7: Once again fairly untroubled. Made a few good runs down the flank, but nobody was there to head his crosses home.

Varane 6: Not a poor debut by any stretch. Was not involved too much and looked a little nervous when he was. Should have closed the man down better in a first half Georgia chance.

Sakho 5: At fault for the Georgia goal. Should have done better to head the ball clear. Did not do too much during the game. Made a couple of good clearances in the second half.

Clichy 6: Made some good runs down the right and Benzema should have scored from his first half cross. Most of the Georgian attacks came from down his side.

Matuidi 7: Cut out a few Georgian attacks in the first half and was the root of a few French attacks. He was substituted off, but will probably start against Spain.

Pogba 6: Looked calm and controlled during the game. Was involved a few times going forward. Looked to be easing into his Les Bleus career. Was not too heavily involved.

Valbuena 10: Absolutely brilliant. He was the best player on the pitch by far. Two assists and a goal do not tell the whole story. He set up multiple other chances for Giroud and Benzema, which did not find the net. Marseille will struggle to keep him in the summer on that performance. The whole performance went a bit flat when he came off.

Ribery 8: Had a very good game. Often under performs for France, but did not find the Georgians that hard a performance. Finished with a goal and an assist. Also hit the bar in the first half. Looks likely to start against Spain.

Benzema 3: Awful. Did not look like he cared. He wasted multiple chances and was booed throughout the night by the home supporters. Everyone is running out of patience. Will be interesting to see if he scores against Spain.

Giroud 7: Scored a well taken goal in the first half and used his strength well to hold up the ball on multiple occasions. Could and really should have scored another in the first half, but he tred to be too clever. Overall a good display from the Arsenal man.

Menez 6: Did not offer too much when he came on. Played a few good balls, but the game was already won.

Sissoko 6: The Newcastle man made a few charging runs through the tired Georgia defense. Came on fairly late in the game. Showed glimpses of his current form for Newcastle.

Remy 5: Did not offer too much, but the whole attacking presence went a bit flat when Valbuena came off. Had limited time on the pitch to show what he could do. 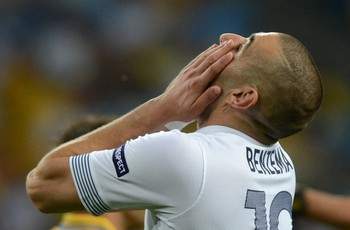 Another poor game: Fans running out of Patience with the Madrid forward
[Goal.com]