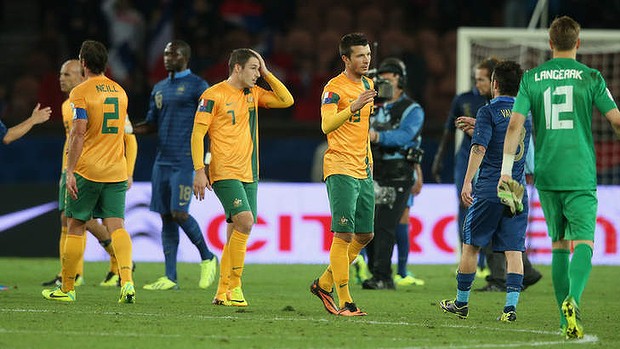 The Parc des Princes crowd enjoyed a rampant French display as Les Bleus thrashed the Socceroos from down under 6-0 in this international friendly. Charles Stone gives his player ratings for the French side after this evening’s performance:

If my counting skills are to be relied upon, then France’s captain touched the ball only 11 times during the whole encounter. Australia had only one shot the entire match from former Everton man Tim Cahill which was blasted over the bar. When Lloris had to pass the ball, he did so with intelligence and accuracy.

There is no question that this type of game enables Evra to thrive the most. With very little defending to do he was able to bomb forward with aplomb, combining with RIbery brilliantly on several occasions and producing an assist for Olivier Giroud’s first goal. When there were defensive duties to be carried out, he should his experience through interceptions and tactical fouls when needed.

Only played in the first 45 minutes of the encounter and looked ever so slightly suspect in the opening minutes. His pass completion rate was almost faultless and he supplied Ribery with some very accurate long balls which led to goalscoring chances. Again, next to no defensive work to do.

The Real Madrid centre back gave a good account of himself tonight, showing off his array of attributes on the field. Dealt with the limited offensive threat that Bresciano posed with ease and produced a selection of pinpoint balls to teammates throughout the course of the game. Varane also tried to pose an attacking threat from corners. At one point in the first half he had a free header which he should perhaps have executed in a better fashion.

If Australia had any hope of penetrating the French back four at any stage during the game, it was down Debuchy’s flank. He made a handful of mistimed tackles and inaccurate passes which encouraged the Aussies to work the ball down their left hand side. He did however score an impressive volley in the second half which he can be proud of. Probably the best goal of the night.

This 20 year old is quite frankly a revelation. He makes the dogfightish defensive midfield work seem easy and executing his duties with class and style. His eye for a defensive-splitting pass was evidenced on multiple occasions during the game from all angles and with varying lengths. He often instigated the majority of France’s offensive creations before he was substituted in the early stages of the 2nd half. If he isn’t already, Pogba can most certainly become one of the most prominent defensive midfielders in recent footballing history.

Take nothing away from the central midfielder, he has probably the most accurate and dangerous shot in the whole of the French team. His goal was the result of a wonderful hit which swerved with such ferocity making it an impossible save for Langerak to make. However, Cabaye’s passes were loose at times and his insistence upon playing the ball centrally and in behind the Australian back four was neither successful nor appreciated by either Benzema or Giroud.

SUPER FRANCK! I must admit, I did not really understand why so many of my colleagues have backed the Bayern Munich winger for Ballon D’Or success this year, until tonight that is. Honestly, there was no faulting Ribery on this occasion. His direct dribbling game paralleled with his close control and ability to turn on a penny as they say meant that France were almost assured of a goal scoring opportunity every time the ball came to Ribery’s feet. His combination play with Nasri and Giroud was both exquisite and delightful. Oh and he also scored a very assured penalty at the beginning of the match which served as the catalyst for tonight’s rampant win. Chapeau Mr Ribery!

Samir Nasri is well and truly back into the French squad. 2 and a bit years on from his disgraceful antics at Euro 2011, the FFF seem to have finally accepted his importance in the national set up. Tonight, his skill, creativity and constant presence at the centre of the French attacking quartet made it impossible to ignore Nasri’s individual brilliance. The partnership that the Manchester City man is forming with Ribery should go further than to excite French fans, but the footballing world.

Newcastle’s loanee played out on the right wing this evening and struggled. Largely invisible, when Remy did have chances he fluffed them (including one rather simplistic one on one where he lacked the composure to score). He was enthusiastic but perhaps over-eager. The ball was predominantly hogged by Ribery and Nasri on the opposite flank but Loic Remy should have scored at least twice this evening.

Here is an example of a player who is high on confidence. The Arsenal forward scored a brace and his surprisingly nibble feet for a 6ft something striker were again evident as he showed great improvisation for his first goal. The second was well dispatched and he may have been frustrated at being substituted at half time for Karim Benzema. Either way, if Deschamps were to pick his team against Finland on Tuesday on the basis of form alone, Giroud should undoubtedly start.

Replacing Abidal at half-time, Sakho put in a very solid shift for Les Bleus tonight after a spell of being excluded from the squad due to a lack of game time at club level. He was imposing in the air, impressive in his decision-making in terms of passing and energetic. Certainly a player who was looking to impress the France bench tonight.

A very good performance from the Marseille man was somewhat dampened by the disappointing rings of boos from supposed ‘France’ fans (actually PSG) whenever Valby had the ball at his feet. Did however seem unperturbed by the negative response and was always looking to create. His wonderfully agile feet made him very difficult to stop from an Australian perspective. Another player who fought hard for France tonight, giving Deschamps serious selection headaches over the weekend.

Yes Benzema has finally ended his goal drought in a French shirt. He scored for the first time in 1222 minutes and this should hopefully relieve some of the pressure he has been submerged under by the French press in recent months. However, there was nothing particularly impressive about the rest of his performance. He looked a second slower than the rest of the France attack on the ball. He kept making strange runs down the left hand side of the pitch which forced Valbuena into awkward positions and he had two other chances which he should have done better with. He may have scored, but he is a mile away from his best.

Replaced Evra relatively late on but showed passion and desire in the French shirt. Perhaps a little over-eager to impress, but the Manchester City full back gave a good account of himself.

The PSG fan favourite was met with deafening cheers when he replaced Paul Pogba this evening. His passes were mostly accurate and he had a good shout for a penalty when he was chopped down by Neill in the area. His self-confidence and ‘first to every ball mentality’ is evident these days and he is growing from strength to strength in the Blue.

Played the final 12 minutes or so of the match and created a good goal scoring opportunity for himself but was unable to slot home. Otherwise, did not have enough time on the field to make an impression.