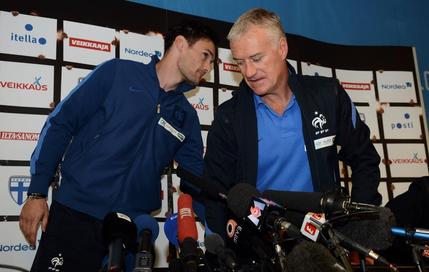 Here are the key quotes from Didier Deschamps and France Captain Hugo Lloris from their pre-match press conference earlier, a day before the World Cup qualifier clash against Georgia:

Lloris on Varane: ‘If he plays he will be ready. We have played together in training. He will fit in fine.’

Lloris on Georgia: ‘Of course we are favourites. Ideally we want to score very early in the match. I have to be 100% concentrated in this type of match. There are always certain interventions I will have to make.’

Lloris on France’s home form: ‘Our last 2 matches here have been losses to Germany and Japan. We must change that tomorrow.’

Deschamps on his midfield selection headache: ‘We will see from the result of the match tomorrow if I have made a good or bad decision in terms of the the central midfield. ‘

Deschamps on the defence: ‘The last time Sakho and Koscielny played together was in October…’

Deschamps on the formation: ‘On such a surface we would have more presence with 2 attackers (hinting at a 4-4-2).’

Deschamps on the potential Giroud-Benzema partnership: ‘It depends on the offensive set up each game. They can compliment each other sometimes.’

Deschamps on whether he would quit the France job if he loses to Georgia: ‘That is no joke. I am not going to put myself in a checkmate position.’

Deschamps on preparation: ‘I have watched the last 6 matches Georgia have played to give my players the best chance of winning.’

Deschamps on squad fitness: ‘Every one of our players is available for selection at this moment in time.’

Deschamps on Benzema: ‘There have been encouraging signs. He is moving well. He is relaxed and concentrated.’