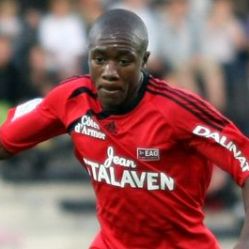 As much as the transfer window may have closed for the meantime, Newcastle’s scouts are still working away to find the latest young talent in France, before anybody else does. Graham Carr, Newcastle’s chief scout, has visited a few grounds around France since the start of February, and our sources tell us that he has watched Guingamp’s defensive midfielder Gianelli Imbula more than once:

Newcastle have a problem though, both Chelsea and Arsenal, as well as a few Italian clubs are said to be tracking this talented 20 year old. Lyon have also made an inquiry, but the Ligue 2 side are said to see a greater profit in selling him abroad, if they get rid of him. Guingamp also sit fourth in Ligue 2, but they are tied on points with Nantes in second. They therefore have a good chance of going up, and if they did, Imbula might be encouraged to stay. Imbula has also tried to distance himself from the Newcastle links by saying:

“I have a contract until 2015 so let’s see what will happen. Guingamp is my club and they will have their say. Newcastle are in the Premier League, you are talking about a big club, but nothing is done. It is only paper talk.”

Whilst this could be viewed as the player attempting to end speculation about his future, it could also be viewed in a different way. “Lets see what will happen”, could suggest that a transfer is possible, and whilst Imbula claims it is only paper talk, he describes Newcastle as a big club, and at no point says that the transfer will not happen. The fact remains that Imbula has been watched by Newcastle, and there is clearly come truth in their interest therefore. Despite this, we are by no means saying that Imbula will go to Newcastle this summer. Wanted Man: Three Premier league clubs are set to battle it out for the highly rated youngster
[Via ‘The Mail’]

Imbula was born in Belgium and is illegible to play for both France and the Congo. He has played in 24 of Guingamp’s 27 games so far this season, and is one of the main reasons that they are doing so well. He tends to sit in front of the back four and is brilliant at breaking down opposition attacks. He is not afraid to run with the ball, however, and also has a good eye for a pass. He has improved greatly this season, but Guingamp saw his talent from a young age, and three and a half years ago, the 20 year old became the youngest player ever to play in Ligue 2, at the age of 17. Imbula has only scored one goal this season, but it was an absolute screamer that anyone would be proud of:

So overall, whatever happens, it appears likely that there will be interest in the player in July and August. He has a contract until 2015, but it seems hard to see Imbula staying at Guingamp that long, with so much interest elsewhere. Newcastle have shown the most interest since January, but I am sure that Arsenal and Chelsea are also tracking this one closely. We shall have to wait for July to see if anything will actually happen.