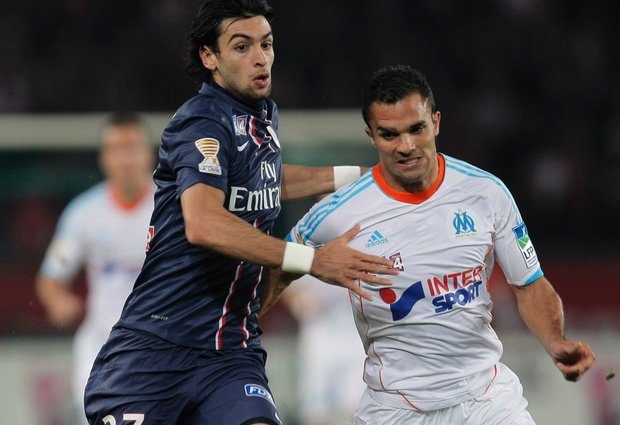 We take an In Depth view into possibly the most poorly perceived Ligue 1 footballer this season’s (2012-2013) career and how the left-back has ended up playing regularly for Marseille. Usually, in this series we take a detailed look at some of the world’s best footballers, and what the rest of the football community thinks of them as well as how they came to stardom. Today we let you decide if Jérémy Morel is a star for all the right reasons or not. Courtesy of So Foot

Morel is a born and bred ‘Breton’, having started his footballing career with local outfit Quimperté under the instructions of his father. His progression through his teenage years were as straightforward as an aspiring young footballer could hope for, joining the FC Lorient youth academy in 1994 and spending 7 years there.

Jérémy initially played as an attacking winger or left-sided forward during the majority of his time in Les Merlus’ youth academy, but as the competition for places increased and more talented attacking players came into the setup, Morel was forced into playing left-back to stand any chance of making it professionally. Lorient could have dropped him there and then but they admired his work ethic and his ‘first to every ball’ mentality. They kept him on.

At the age of 19, he was given his professional debut in Ligue 2 without much ceremony in a 1-0 defeat to FC Gueugnon. He slowly built up a reputation of ‘Mr Consistent’, but never really shone. However, he was a continuous fixture at left-back for 6 years despite the fact that it became obvious he was, at times, struggling with the physical side of his game.

When Lorient were promoted to Ligue 1 in 2006, they could not afford to make any considerable investment, so Morel remained first choice left back. With his confidence high and his performances solid, the Frenchman will probably admit these were his best days.

Marseille tracked the left back for 4 years believe it or not, dispelling rumours that Morel was some sort of panic buy on their part. They would have made an offer in January 2009, but Morel suffered an adductor muscle injury, which he was unable to shake off until the penultimate weekend of the 2009-2010 season.

In a coy attempt to keep Morel at the club, Lorient manager Christian Gourcuff made him captain at the beginning of the 2010-2011 season and this vote of faith transformed Morel into arguably one of the best left backs that season. He had the confidence to dive into challenges when he saw fit and to take players on when going forward. However, when Marseille offered €2.5m for the left back in June 2011, it was too good an offer for Lorient to reject.

Cue a season of unparalleled criticism from French media and OM fans. The left back rapidly became the laughing stock of French football. Why? Some defensive howlers, including one very memorable own goal agains Sochaux recently and the sudden lack of ability to play with real intensity meant that Morel became a scapegoat for Marseille’s poor performances and a forgotten man during their triumphs.

Look at the latest ‘Le Clasico’, on the 27th February 2013, when Morel’s needless and reckless challenge resulted in giving away the penalty, which ended Marseille’s Coupe de France hopes.

Humiliated and mentally weak, it seems unlikely that Marseille will keep him in the starting XI for much longer if they have the choice. We understand they had an offer for Montpellier’s left-back Henri Bedimo rebuffed in January and are likely to return to him in the summer.

As for Jérémy, whether he is happy to sit on the sidelines next season or will look to find a new club where he can be appreciated again, we will see.

On the 2011-2012 season: ‘Last season was difficult for this team, everyone one will have a fair chance in this team this year.’

On PSG: ‘The more people talk about PSG, the less they talk about us, and that is good.’

On his critics: ‘There is no hiding it, this year has been easier than last year’…

‘At the end of the day, it is only football. To spend time talking about Marseille’s Morel at home, people must be very bored. Apparently, it is thrilling…’

‘I will not say that it does not affect me, but I have to admit my job is pretty cool. Everything that happens as a result of it, I try not to think about.’

On the rumours that Marseille are looking to sign another left-back: ‘I think it is important in a big club like this that you have at least 2 players in who can play a position. Otherwise, you tend to relax.’

On David Beckham: ‘He was a big, big player that is for sure. But now…’

The Footballers’ and Coaches’ View:

Carlo Ancelotti: ‘Morel was making dangerous runs down the left. We must be careful.’

Elie Baup, Marseille manager: ‘He is one of the players I have used most since I have been here. He gives us good options going forward. He is exemplary.’

Younes Belhanda (last season): ‘Morel says that Marseille are already over their Cup final defeat. This guy has only been at the club for 2 months and he is acting like that! He has sparked a fire.’

We asked a few top French football experts to give us their opinion of the troubled left-back:

Andrew Gibney (@AGibneyftbl), French Football Weekly: ‘After his excellent season with Lorient no one would have questioned the signing of Jeremy Morel. It looked like good business from Marseille. He is definitely more stable a defender than Taye Taiwo and not as combustible.’

‘He has a great left-foot and a good engine, but defensively can get caught out of position and also gets overpowered too often. However he is not as bad as OM fans make out, he becomes the scapegoat too easily. Overall an average player but his plus points out-weight the negatives. Needs to provide more of an attacking threat in the final third.’

Jonathan Johnson (@Jon_LeGossip), French Football Weekly and ‘Le Gossip’ Sky Sports column: ‘The last two seasons have been a struggle for Morel. Whilst the former Lorient man has looked assured for OM at times, his time at the Velodrome has been far from perfect. Last season’s disappointment was compounded by some poor showings from the left-back and this season has been the same.

He is a shade of the inspirational captain that we saw with Les Merlus. In contention for a call-up to les Bleus squad when with FCL, international recognition is a forgotten dream for the 28-year-old.’

Johnny Séverin (@jseverin11), Bein Sport football journalist: ‘Morel was a good player before signing for OM. By opting for Marseille over Rennes, everyone thought it was a good deal. However, that didn’t last for long. He is very naive in defensive duels, consistently makes errors passing and offers very little going forward.

This year certain individuals see progress in his performances, but is this not because the general team has weakened? The most surprising thing is that, apart from Mandanda, Morel is the only player not to have any competition for his position!

In his defence, he would be more comfortable if Marseille played 4-4-2 like Lorient did, so that he would be less exposed defensively. His poor positioning and timing would be less obvious that way.’

Anzhi bid for Kaboul and Rami: What Next?