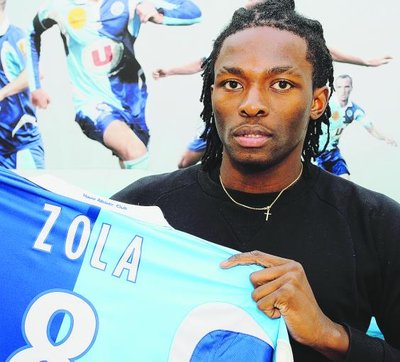 Get French Football News had a chat with Le Havre and Congolese defensive midfielder Distel Zola on a variety of topics including Youssuf Mulumbu, Blaise Matuidi, struggles with injury, hopes of becoming a key figure in the Congolese national team setup and much more.

This interview has been translated from French to English.

Have you always enjoyed football, even when you were a child?

Yes, I started to play football in my region, then my father signed me up to go and play with Champigny-sur-Marne at the age of 5. I started at the local Parisian club in 1994.

What was your best memory as a young footballer in Paris?

My best memory was in the juniors at Champigny. We were in the national cup, representing the whole of the Parisian region.

Was it difficult to leave you family and go and join Monaco in 2004?

Yes it was a bit difficult to go, but Monaco is amazing. I have friends like another family there and I go every holiday.

What do you think of manager Ricardo Gomes?

Ricardo is a great coach, he liked me a lot but unfortunately I got injured and then he left the club.

What has been the most difficult moment in your career so far? Was it the injury that you suffered in 2008?

Yes I think you are right it was probably that. I suffered two ruptures to my cruciate ligaments in the same season. On the left and then on the right. It was tough but it moulded me into a better person. I have an iron mentality now and I am not scared of anything in life. I want to take this opportunity to thank all the medical staff at Monaco for doing such a good job.

Do you think the injury you suffered hurt your chances of reaching the top level in football?

No, not at all. Immediately afterwards of course it slowed my progression but I healed well. I feel like I am in super form at the moment. My support is growing. It gives me confidence when I see examples like Blaise Matuidi, who is a good mate of mine. In my view, he worked step by step to become the great player he is today. So I keep at it and we shall see. When I see friends of mine of my generation at Monaco, who have evolved in Ligue 1 to become big players like N’Koulou, Mollo, Bakar, Sagbo, Mongongu… It motivates me.

So you are quite close friends with Blaise Matuidi? What do you think of his progress this season?

Yes I know Blaise well, we’ve known each other since he was at Troyes. Yes, he is an example to everyone because his brilliant season is thanks to the work he has put in.

Do you think he (Matuidi) is the best defensive midfielder in the world at the moment?

Ancelotti said the same yesterday. It is true that he is doing great things.

After 30 matches of representing France at U16, U17, U18 and U19 levels why did you choose Congo as the country you would play for internationally?

It was a natural thing for me to do, even though I have still to play a competitive game for my country.

Who is the best Congolese footballer at the moment then? You, or Youssuf Mulumbu perhaps?

(He chuckles) No I am still quite a long way off Youssuf. He is actually one of my best friends we went on holiday to New York together last June and I have been to seem him twice in Birmingham this season. He really is a top player and I learn a lot from him! He has also given me a lot of advice. But what he does at West Brom is really impressive. He loves the fans over there. They have a chant for him that says he is better than Kaka, brilliant.

Will you be playing your first competitive fixture for Congo soon then?

I hope so. If I am selected it would be a great honour. But like at the African Cup of Nations, if I am not picked I will be the number 1 supporter. Now my aim is to continue to progress with Le Havre and if I am successful everything will fall into place.

In your view, will this be your best ever season yet?

Yes, because even though it has been difficult because we changed manager 3 times this season I have played regularly despite this.  Now with Eric Mombaerts, I think I will beat my record of games in a season which was during my loan period at Laval where I played 27 games.

This red card: (here). Surely a mistake by the referee? Do you see yourself as an aggressive player?

Yes that was a really harsh one. This has happened twice to me this season. I’ve been given 2 red cards where in England they would certainly not have been. Sure, it is football, but I have to be the boss of my midfield zone.

Did you receive any offers from clubs last January Transfer Window?

Not  for the moment, at least, not to my knowledge…

Realistically, where will Le Havre finish in Ligue 2 this season?

The climb is not finished if we are able to win all our matches so there you have it. We are virtually safe, now we just need to keep our confidence and continue to play freely. Tomorrow we have an important game against Auxerre so it starts there.

What do you think of Auxerre’s sensation Yaya Sanogo?

I do not know him personally but it is impressive what he has achieved after such a long period out through injury.

Why did Nancy let you go last summer?

It was complicated with them. I arrived and then I got injured and when one saw the standings I had to come to Le Havre (on loan initially) and then the project convinced me to sign last summer full time for them. I signed a 3 year contract to play lots of games and to become a stronger player.

That might have been a wise move by you, considering Nancy are likely to get relegated this season!

Exactly, but whatever it is football. I remain friends with some of them over there so its okay.

In your opinion, who is the best player in the world at the moment?

For me, it is Messi or Cristiano Ronaldo. They are equally good.

Tell us something we don’t know about you.

I like England a lot and I often go there to see friends.

Finally, what would be your dream club to play for and why?

I love the atmosphere inside the football stadiums in England, but otherwise I do not really have a favourite.

Many thanks to Distel.