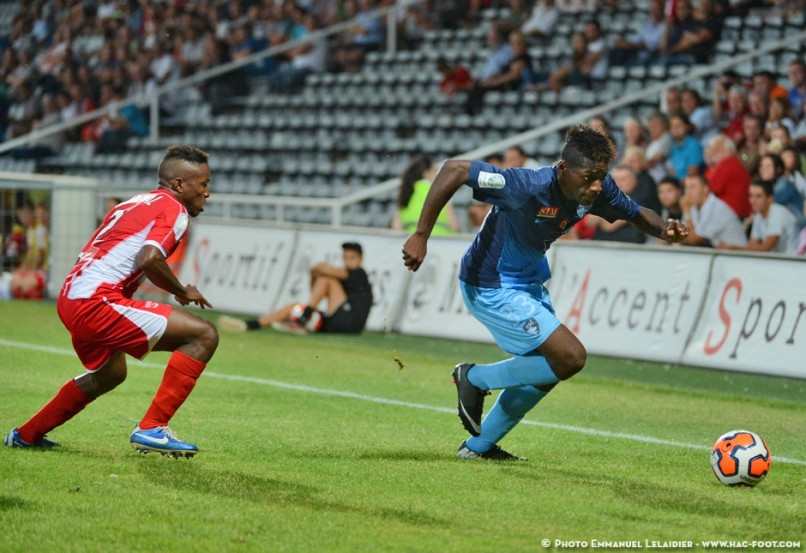 Get French Football News caught up with one of the most promising central midfielders currently playing in Ligue 2, 19 year old Harrison Manzala. The youngster was late in beginning his road to becoming a professional footballer but managed to achieve this very feat last season. We talk about the future, his friend Florian Thauvin and whether or not he will represent France in the future:

Are you disappointed with Le Havre’s performances so far this season?

No not at all. We are playing some very good stuff even though we haven’t managed to win a game yet.

Indeed. Tell us how you have arrived at this point in your career, your story.

I started football late on in my life, at the age of 13 at Neuilly in Paris. Then when I was 15 I became part of SC Bastia’s youth team and I was there for three years. At the end of my third year it was no longer working. I felt I was ready for something else I did some silly things that resulted in me quitting the club. I did everything I could last season in the CFA (4th division) and then I made it into the first team, scoring a goal in my first professional game. Since then, I have not been dropped from the first team.

What silly things did you get up to at Bastia that caused the fallout?

Nothing serious, but I won’t go into detail.

Quite simply, are you happy?

Of course. Living in the moment, with excitement and some of the best things in the world.

Do you have any regrets? If you had started playing football at an earlier age perhaps you could be playing Ligue 1 football now?

(he chuckles) Honestly no I started playing football late because I was supposed to. It is true that I have had to catch up in certain respects on others. But I don’t regret anything. I am proud to have put myself in the position to maybe play in Ligue 1 but I must keep working.

A lot of journalists I have been talking to recently are really excited about you this season. How does that make you feel?

Obviously that is great news. It means my work and efforts are being observed but I remain level-headed and I remember where I came from.

What are your feelings towards the Florian Thauvin saga that occured over the summer. Was he disrespectful in any way?

That us how it looks in the way he acted but I am not getting involved in that. We remain friends after the whole Marseille/Lille situation.

What is Florian like as a person? Confident or shy?

He is not shy. He likes to laugh. He is a good guy and a very good friend. He always helps his friends out and he is confident in himself.

How was your summer transfer window? Were you approached by other clubs?

Very calm. I was assured in my head to continue with Le Havre.

What do you want to achieve with Le Havre this season and with France/Congo?

I want to have a good first full professional season and give the most I can in terms of goals and assists. Overall as a team we want to have a good championship. My international situation is quite complicated. I was part of the Congo team this year just to see how their international setup worked and whether it was right for me. Now I am open to anything. I am playing with an open mind for my club and I hope the rest will come.

Finally, is it a realistic objective for Le Havre to be promoted this season?

Definitely, we all believe it.

Thank you very much to Harrison and we wish him all the best for the future.