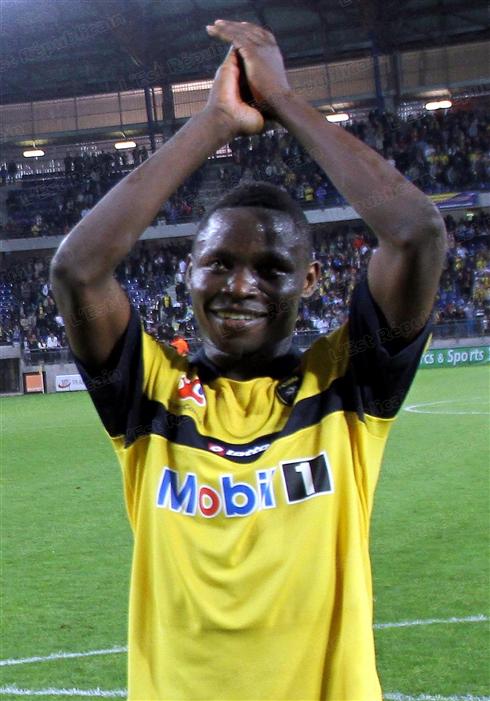 Get French Football News had the pleasure of asking Sochaux’s defensive midfielder Joseph Lopy a few questions on Ligue 1 survival, Demba Ba, as well as the wonderful memories has from his time at DIAMBARS and much more:

Joseph has enjoyed competing this year, but says he should have played more games.

This interview has been translated from French into English. The French transcript of this interview will be available shortly.

What are your feelings towards Mécha Bazdarevic as a coach (the former Sochaux boss)?

I had a good working relationship with that coach just as I do with our current coach Hély.

Was it difficult to leave Senegal and come to France?

Honestly, it was tough to leave my family, my friends and my teammates at DIAMBARS for another country. However, after a few months, I was finished settling in and slowly the emotions of missing my life in Senegal went away.

Who inspires you in the world of football?

My inspiration since I was a young boy has been Steven Gerrard, the Captain and midfielder of Liverpool.

Is Sebastien Corchia really as good as everyone makes out?

Yes, Sebastien is one of our key elements this season; he has a great career ahead of him I think.

What is the atmosphere in the dressing room like at the moment? One of optimism?

The atmosphere remains good, despite the difficult situation (the threat of relegation); we are all concentrated on on our own unique objective to finish the season in Ligue 1 and we will maintain that.

Are you happy with the amount of games you have played this season? Would you have liked to have played more?

I would have liked to play more this season; however, my ankle has not always allowed me to be at 100% and therefore I have not been there for selection for the coach to decide.

If Sochaux were relegated this season, would you stay?

I do not ask myself that question, I am solely focused on keeping Sochaux in Ligue 1.

Who has had the biggest influence on your career so far?

The current joint manager of Senegal, coach Boubacar Gadiaga. He made me realise what my aim was when I got to DIAMBARS  and always pulled me through it all. The same can be said for Babacar Tabane who was my coach at DIAMBARS. Finally my current manager Eric Hély who made me grow up as a footballer and win my first international caps.

Who are your best friends in the world of football?

They are those who started off with me at DIAMBARS: Omar Wade (Mouscron), Idrissa Gana Gueye (Lille) and Pape Souare (Reims). Also Quentin Perreira of Reims too.

Is Demba Ba the best striker that Senegal has ever had?

Who has been the best player you have ever had to go head to head with on the pitch?

The Premier League of La Liga? Why? Which is better?

The Premier League because I like the physicality of the players and their commitment as well as the sheer passion the fans have for their club. Each Premier League game you see that everyone is at 100% from the beginning right to the last second of the match.

Tell us something embarrassing about one of your teammates at Sochaux.

Have you ever been close to joining another clubs aside from Sochaux in your career?

Many thanks to Joseph for his time. We wish him and Sochaux all the best in their fight to avoid the drop.

VOTE: Ligue 1 Team of the Year: The Strikers