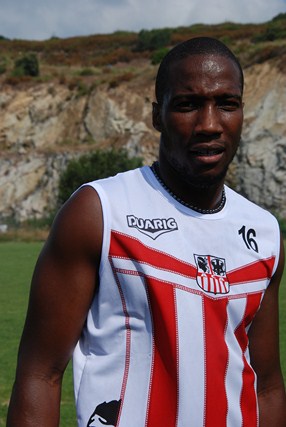 Get French Football News chatted with the upset and disenchanted Ajaccio goalkeeper Oumar Sissoko, who incidentally is cousin of on loan at Fiorentina from PSG defensive midfielder Mohamed Sissoko. He exclusively tells us of his need to leave Ajaccio and where his cousin Mohamed must not end up next season in this explosive interview.

Oumar played twice for Mali in this year’s AFCON, a proud moment for him says.

This interview has been translated from French into English. The French version of this interview will be published separately.

Why did you leave Metz last year?

I left my founding club, the club that formed me because my contract expired. My agent and the club were in discussions about extending it, but it just did not happen.

Do you think that Guillermo Ochoa (Ajaccio’s 1st choice goalkeeper) is better than you?

Of course he is better, otherwise I would be playing every weekend.

What did you learn at the African Cup of Nations?

I mixed with great African players in that tournament. I was able to learn and progress in my evolution as a player.

What inspired you to become a footballer?

In training, who is the laziest at Ajaccio?

At this level everyone works to the max, there is no time to rest at the top level. You do not have that choice.

What do you think of Albert Emon (Ajaccio’s current manager)?

The relationships between the manager and the players is currently very good. He is showing and teaching us his ways.

Do you think your cousin Mohamed Sissoko will stay at PSG next season?

No, he must leave, that is the best thing for him. His game is much more suited to the English, Spanish and Italian leagues.

Interesting, so are you very close to your cousin?

Yes we are. We often call each other up to talk about what’s new, how the family is and so on.

Who is the funniest at Ajaccio?

If another French club came to try and buy you in summer, somewhere where you would be the first choice keeper, would you leave Ajaccio?

I am of course still under contract with Ajaccio. You are right though, at the moment I am really looking to play regularly and I am going to sit down with my club shortly to decide my future.

Is it frustrating you at the moment, this lack of game time?

I am a competitor so its true that the best thing for me is to play in as many matches as possible. I have to remain patient.

If this discussion with Ajaccio comes to the conclusion that they are okay for you to leave, will you?

If I can come to an agreement with my club regarding a loan or a transfer, and I like the project at the club that wants me I will go yes.

What is your ultimate goal in football?

My ambition as a player is simple. To play at the highest level possible and for as long as possible. Also to live beautiful adventures on a human level and on a sporting level.

Realistically, where will Ajaccio finish this season in Ligue 1?

We have done promising and good things this season, the team is in good spirits. If we approach the next matches with the same level of focus, we can finish in the top 10.

What is Adrian Mutu like as a player and as a person?

Mutu is a class act. He is a world class player who has won a lot of things. He is a competitor who loves to win.

Tell us something we don’t know about you.

I am timid person.

Is it difficult to be a timid goalkeeper?

Difficult…no. Because I know how I should be on the field, it is different when I am off it. I meant more in daily life, rather than in football.

Many thanks to Oumar.