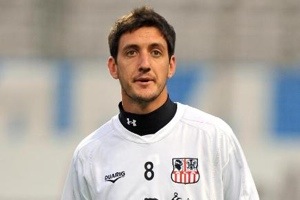 AC Ajaccio confirmed on their official website today that Captain and leader Jean-Baptiste Pierazzi is in negotiations with an MLS side about accepting a contract there.

They were forced to amend their statement halfway through the day after initially indicating that he was talking to a club based in Chicago, but this turned out to be false.

French football journalist Jonathan Johnson confirms that the club Pierazzi has been offered a contract by an MLS club that is not Chicago Fire.

One assumes that Ajaccio are therefore willing to mutually terminate Pierazzi’s contract and allow their captain, who has been a loyal servant for 7 years and has known no other club but ACA in his career, to call it quits.

This announcement will add to Ajaccio fans’ woes after a catastrophic first half of their Ligue 1 campaign will force them to enter into a relegation dogfight in 2014 to keep their top flight status.

Rumours are circulating this evening that the club in question is the San Jose Earthquakes.