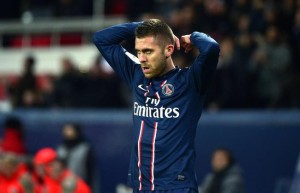 PSG attacking midfielder is in talks with Juventus about a January transfer window move. The player has fallen out of favour at Paris after unsavoury incidents including his storming off the subs bench and into the tunnel this Autumn when he was told he would not be brought on in the 2nd half.

Our friends at L’Equipe understand that the player’s representatives are negotiating with Juventus about a possible move, but that AC Milan are also interested.

According the the Gazzetta dello Sport, Jeremy Menez could be available for as little as €3.5m because his contract expires in June 2014.

Laurent Blanc has not used Menez much in terms of squad rotation this half season and after a lack of game time in the 2012-2013 season the player is understood to be actively looking to leave.