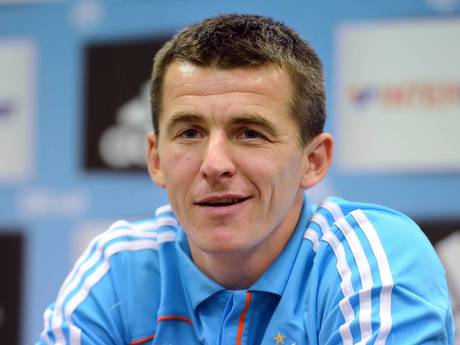 At the moment, Joey Barton’s footballing future is hanging in the balance. As many of you will know, the ‘loud and proud’ Englishman is currently on loan at 2nd placed Marseille from likely-to-be-relegated Premier League side QPR. Up until this week, there was a very real chance that OM may make the effort to sign him permanently, but not now.

One merely has to give his Twitter feed a quick glance to understand why. More on that later, but now an assessment of what he has actually achieved on the pitch. In many respects Barton has adapted to life at Marseille better than many would have expected. At the time of writing, Joey Barton has made 22 appearances for L’Olympique and has put in some very decent shifts in front of the back 4. By no means has he been one of Marseille’s weaker players this season, but there can be no argument that he has been one of there best: he hasn’t.

Yet there are reasons why Marseille’s Sporting Director Jose Anigo has publicly stated that he would seriously consider extending Barton’s stay in the South of France. He has given OM that bit of bite that they have lacked in previous years. Also, one imagines he is quite a character in the dressing room, despite failing to get a decent grasp of the French language having spent about 8 months in France now.

This ‘character’ comes hand in hand with the numerous unsavoury incidents Barton involves himself in on and off the pitch. Most recently, Joey Barton received his first red card in French football for needless challenges and arguably cost his side 2 points as they went on to draw 0-0 with strugglers Nancy.

On the 27th of February he was involved in an on-pitch spat with PSG’s Zlatan Ibrahimovic in which he insinuated that the Swede had ‘a big f****** nose’ in the pivotal Coupe de France clash which Marseille eventually lost. Watch the scene unfold here:

Earlier on in the season, In November (17th) Barton was involved in an embarrassing incident in a training ground friendly against Ligue 2 side FC Istres. Barton proceeded to make an ‘unacceptable’ challenge on Istres’ Guy-Roland Niangbo and the pair then proceeded to square up to each other. One must note that Barton at this point had yet to play a competitive game for Marseille, what with the ban he obtained at the end of the 2011-2012 season after kicking Sergio Aguero to the ground and attempting to headbutt Vincent Kompany.

He is forever the figure of controversy on Twitter too. He viciously insulted Dietmar Hamann, calling him ‘a maggot’ after the latter made a passing comment on Barton’s non-existent international career. Other regrettable gaffes using social media by Barton include him wrongly reporting that former teammate Loic Remy was off to Newcastle during the January transfer window, when in fact he ended up signing for QPR.

Hamann is not the only man unfortunate enough to have been subjected to vile abuse from Joey Barton over social networking medium Twitter. At the beginning of February, Barton called Brazilian wonderkid Neymar ‘great on youtube, but cat s*** in real life.’

However, he took things to a new level this week when he described PSG centre-back Thiago Silva as an ‘overweight transsexual’, sending shockwaves throughout French media yet again. This attack was unprovoked, offensive and stupid. The reality of the situation is that Barton knows all that. He is generally happy to accept the punishment for his actions because he is not that unintelligent.

What he may have failed to realise is that Marseille fans’ mood is slowly turning against him with every controversial action Barton takes. He may have amused us all with his strange Franco-English accent on numerous occasions as this season’s Ligue 1 has taken its course, but Labrune and Anigo may well be forced to make the decision to drop any attempts of signing the QPR man permanently. France is frankly fed up with his distasteful antics. Disrespect is simply not tolerated by French football and certainly not by the LFP.

Marseille’s reputation has seen better days. A currently very average and boring side to watch, with the mysterious and generally irritating antics of Sporting Director Jose Anigo, who is currently being investigated for tax evasion and crude attacks on former President’s (Diouf) by using whole pages of advertising in L’Equipe, Marseille can simply not afford anymore embarrassments. Signing Joey Barton this summer, which would mean giving in to his disproportionately high wage demands compared with other members of the current OM squad, may be a step Marseille can simply not afford to take.

The Barton situation has gone from amusing to serious after his latest comments about Thiago Silva and the consequences could reportedly be very real. ‘Paris Foot Gay’, who are the English equivalent of ‘Let’s Kick Racism out of Football’, but instead focusing on homophobia; have claimed that Joey Barton will face the National Council of Ethics.

Marseille should do themselves a favour and not get caught up in the numerous problems Barton could potentially cause in the future. He would be the first to admit that he is not a key player for Marseille and they are better off investing in a young defensive midfielder in the summer that they can nurture and, most importantly, control.