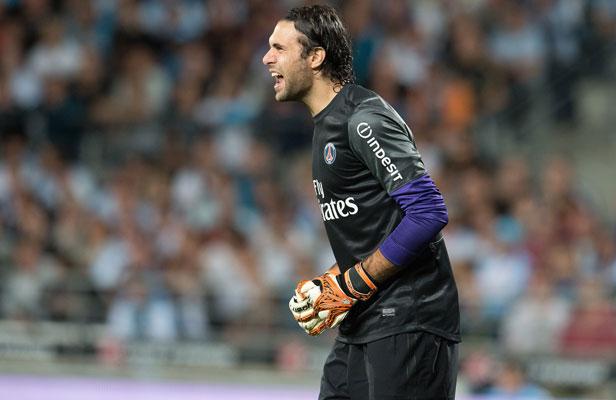 With an amazing 23 clean sheets and only 16 goals conceded in 33 games played, Sirigu topped the Ligue 1 team of the Year goalkeeper vote with relative ease. One might think that this is more down to the defence than the goalkeeper himself and this might in part be true, but the stats do not lie. In comparison with the other goalkeepers, Douchez and Areola, 6 goals were conceded in just over 5 and when the pair of them stepped in between the sticks when often the defence was unchanged.

Sirigu’s second season at PSG has proved to be the best yet. Last season, with Sirigu at the helm, with, it has to be said, no Thiago Silva, PSG conceded almost twice as many goals in the league and at times, Sirigu’s ability was questioned. However, Sirigu’s has certainly fulfilled greater things than when he was at Palermo and despite being in the frame for some time as Italy’s third choice keeper, he has now received some Italy caps to go alongside; despite living in the shadow of the great Gianlugi Buffon.

Sirigu has proved himself to be very athletic despite his 6 foot 4 stature.  Due to this height, Sirigu is a brilliant presence in the air and is often able to claim the ball from the air in order to avert danger from set pieces. Sirigu’s positioning has also improved greatly this season showing that his skill in reading the game is improving all the time. This was something that he was perhaps lacking in his first season with PSG in the 2011/12 season and has now been addressed, highlighting his development this campaign.

There are still issues with his game that Sirigu needs to address. He is still poor with his feet and when the ball is played back to him by a defender in open play, he does look very nervous and a little clumsy, often tending to boot the ball out of play. At the age of 26, Sirigu, as a keeper, has plenty of time to correct this.

The main highlight of Sirigu’s season must be the clean sheet record which the player made this year. He surpassed Bernard Lama’s record of 697 minutes without conceding a goal and did not concede a goal in the league from 17th November to 8th February. A record which one reckons could stand for quite some time. He was able to break the record because of a mixture of fantastic defending with Thiago Silva in form and exceptional keeping from Sirigu himself including a range of saves and blocks.

Sirigu’s excellent season was spoilt slightly by his role in a brawl at the end of a 1-0 win away at Evian in which he received a red card after the whistle had gone. Nevertheless, Sirigu had an excellent season and rightly beats Ruffier to the spot of keeper of the season.

Member of the Ligue 1 Team of the Season Experts Panel and working as a French football analyst for Football Radar, James Lubwama had this to say about the mighty Italian goalkeeper:

‘With the likes of Ibrahimovic, Lavezzi, Lucas Moura and Pastore arriving in Paris, it is easy to forget that teams need more than just attackers if they are to succeed. Lucky for PSG then that they also found the time to sign Salvatore Sirigu, the highly accomplished Italian goalkeeper. His presence has instilled the Parisian defence with a much-needed calm, and his influence finally received the recognition it deserved back in January when he surpassed a PSG record of 697 minutes without conceding a goal, set by Bernard Lama in the 96-97 season. As the transfer merry-go-round prepares to spring back into action, it is not without reason that you won’t hear PSG being linked with top-drawer goalkeepers: they already have one.’

Ligue 1 Team of the Year: The Experts