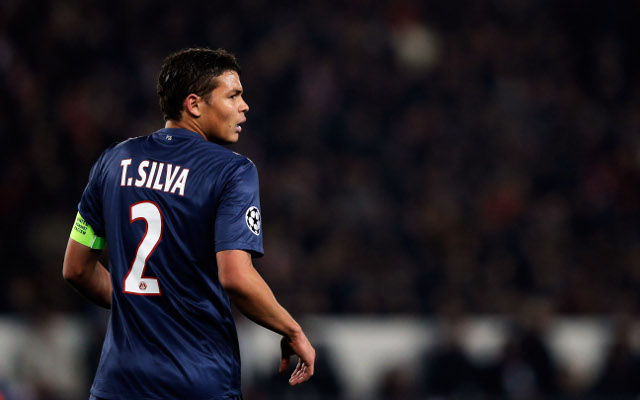 One of the two centre-backs in the Ligue 1 Team of the Year is Thiago Silva:

After a €42m move to the now French champions, Thiago Silva was under extreme pressure to perform to the best of his reported abilities.

Despite seeming ever present in the PSG back line, Thiago Silva has only actually played 22 times in Ligue1 this season out of a possible 38 games. Niggling injuries at the start of the season delayed his PSG debut for almost two months after the French giants signed him, although only a month after the season started. A hamstring injury mid-season against Ajaccio then kept Thiago Silva out of almost two months (From January 11th to March 9th). It is clear, therefore, that the Brazilian has been able to make a great impression in a shorter time than most, living up to his great reputation around the globe.

In all honesty, Thiago Silva has had a truly fantastic season and has been an absolutely pivotal element to PSG’s title winning campaign. The defender has all the qualities that a modern day centre back embodies and he has been able to adapt his game to the French style of play. At the start of the season, he appeared to lack strength, but he has clearly worked on this and is now able to nudge people off the ball fairly easily. His ability to do this has improved as the season has gone on as the 28 year old has since admitted himself that he was not prepared for the physicality of the French game when he first joined PSG:

“I thought this championship (Ligue 1) would be easier and it surprises me more and more each time. I have played poorly in some games, thinking it would be easy, but the attackers are very strong and they put me in trouble in defence because I’m not a very physical player.”

The ability to access ones own performances and then identify areas of possible improvement in order to adapt to the changing conditions as he moves from league to league makes him one of the best centre-backs in the world.

The Brazilian’s main trait that has probably been most prominent this season in Ligue 1 is his ability to pass out from the back. The player, despite making no assists this season, has started numerous attacks from the defence by intercepting the ball and passing it forward by hoofing it into attacking positions. Thiago Silva is also very prominent in both the standing and sliding and this could not have been demonstrated any better than in the Champions League against Barcelona, when he single-handedly kept PSG in the tie in the 1st leg.

Silva’s excellent discipline has also shone through this season as he has only picked up two yellow cards and one red. The red card game in Silva’s last game of the season and must have tarnished the player’s good year. The card is one that is still seen as very debatable as Silva was sent off for supposedly pushing a referee.  See what you think:

Thiago Silva also comes away from the Ligue 1 campaign with no goals to his name, but against Nice, he achieved something spectacular by putting the ball into the net from the tightest of angles, but the whistle had already gone. In that moment, however, Thiago Silva somehow demonstrated the finishing prowess of Lionel Messi (arguably):

Thiago Silva’s season has led to much speculation about his future. The reality is, however, that the player’s ability was known to the world before he came to PSG, so a move after one year would not prove anything. You can be sure that the Brazilian did not come to Paris just to play for one season, but with Ancelotti on his way out, the player is sad to be unsteadied at his departure. We will wait and see, but I for one would expect him in the French capital next season.

Member of the Ligue 1 Team of the Year Experts Panel and freelance journalist (mainly of ESPN and Ligue 1 official) Ian Holyman gives us his thoughts on the Brazilian’s season:

‘When PSG paid €42 million for Thiago Silva, reputedly ‘the best defender in the world’, last summer, I was sneeringly sceptical. I hadn’t seen much of him at AC Milan, and was further gobsmacked at the fee when I found out he was already 27. Ask me now, and I’d reply: ‘He’d be cheap at double the price’. The Brazilian reminds me a lot of myself, actually. No, Joey Barton isn’t likely to be questioning my gender, but the way Thiago Silva has simply dominated opposing forwards with an obscene calmness and insolent ease in Ligue 1 this season is remarkably reminiscent of me playing against my five-year-old in the back garden. His displays against Barça even had Barton admitting the PSG captain can play. I’d already been won over long before that.’