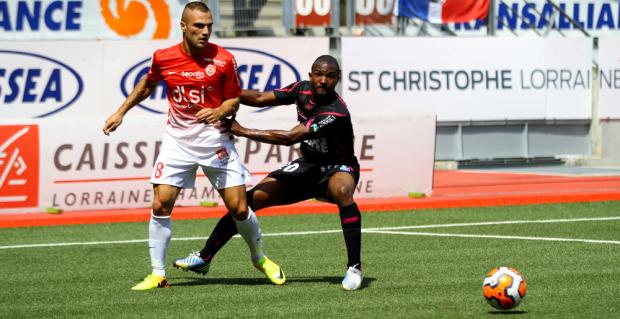 Europe’s second division expert David of Below the Top League gives you the lowdown from an entertaining opening weekend of Ligue 2 action.Ligue 2 could not have asked for a better opening weekend with no fewer than 29 goals in the Friday fixtures, which hopefully sets the tone for the coming season. Especially with a host of clubs eyeing promotion to the top division.

Caen made a promising start to the season with a 3-1 win against Dijon. It was the hosts who opened the scoring two minutes before half time, with Mathieu Duhamel scoring an effort from close range, After the restart Dijon came out looking for an equaliser and on 59 minutes Thomas Guerbert unleashed a strike from the edge of the area which Damien Perquis was powerless to stop. The equaliser awoke Caen from their slumber and with fifteen minutes to go Substitute Livio Nabab put the hosts back in front and the win was sealed when Jonathan Kodija used his strength to beat the defender to slot in Caen’s third and ensure victory.

Another high scoring affair was at the Stade Parsemain where Angers came away from Istres with a 4-2 win. A double from Khaled Ayari ensured the visitors stayed one step ahead of their hosts with an 85th minute Jeremy Blayac goal wrapping up the win.

The sides relegated from Ligue 1 last season Nancy, Troyes and Brest must fancy themselves for a swift return back to the top-flight and all three came out of the first week of action undefeated, with the latter involved in the one of the rounds stand out games. It took a 89th minute equaliser from Denys Bain ensuring that Chateauroux took away a point with a 3-3 draw. In similar fashion for Troyes away at Niort. Kevin Rocheteau had seemed to give the hosts a winning start scoring with ten minutes to go, only for Rincon to equalise with a minute of normal time remaining. Nancy hosted Auxerre on the Saturday and the game ended goalless.

Of the sides which came up from the National, only CA Bastia failed to record a victory on opening week. Going down 1-0 away to Lens courtesy of a 51st minute penalty converted by Danijel Ljuboja. It was a close run thing at the Stade Saint-Symphorien between the hosts Metz and Laval, but a injury time winner from Gaetan Bussmann securing a 1-0 win and all three points on their return. The other side to come up from the National, Creteil travelled to Nimes and must have feared for the worse when Anthony Koura gave the hosts the lead on 15 minutes, but three un-answered goals from Faneva Ima Andriatsima, Jean Michael Lesage and Marcel Josue Essombe, with Essombe scoring a minute after coming on as a substitute. A consolation from Vincent Gragnic made the game finish 3-2.

Arles played out a fairly straight forward victory against Le Harve. All the scoring was completed before half time, with Maurice Dale putting the hosts in the lead after a couple of minutes, and Jordi Delclos adding a second just before the half time whistle.

Fousseni Diawara went from Villain to Hero in the space of 10 minutes, but still couldn’t prevent his Tours side from losing away at Clermont Foot. It was his foul which conceded the penalty on 20 minutes to which Mana Dembele gave Clermont the lead. But Diawara scored the equaliser and it was looking like it was going to give his side a share of the spoils but Hugo Videmont scored the winner with 19 minutes to go. Tours had a perfect opportunity to grab an equaliser but couldn’t make their man advantage count for the final 10 minutes.

Hero of the week: Gaetan Bussmann (Metz) scoring the injury time winner assuring a winning start back in Ligue 2 for Metz.

Villain of the week: Emmanuel Imorou (Clermont) First appearance of the season and shown 2 yellow cards in the space of 15 minutes. Not the best of starts for the defender.