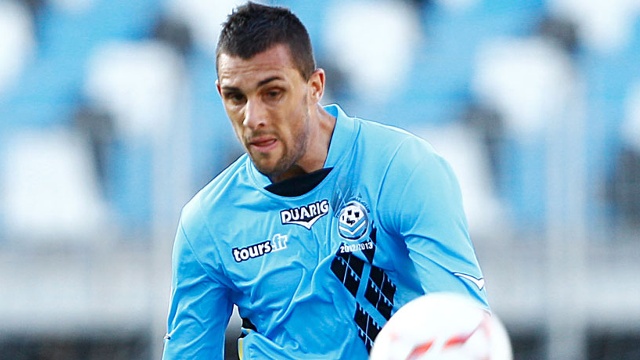 France’s second division returned after the international break with the team at the top facing, on the face of it, a straight forward fixture at home to Niort. Second placed Metz travelled to the north west corner of the hexagon to take on Brest. Making up the podium, Lens entertained Nimes.

This week’s round-up starts with Dijon hosting Troyes. Both teams having recently spent time in Ligue 1 and both have aspirations to return there. With a sole point’s difference between the two sides and Dijon unbeaten in 7 matches this was a highlight of the week’s games. Any fans that decided they wanted to avoid the French traffic in leaving early would have been severely disappointed should they have left.

It was to be the away side that opened the scoring when Ligue 2’s top scorer Ghislain Gimbert opened the scoring with a delicate finish on the half hour. Stephane Darbion had a guilt-edged chance in the second half to kill the game but his shot went wide. In a match without a huge amount of goal-mouth action it was to be a source of enormous regret for ESTAC. In the 89th minute, Cédric Varrault one of the older members of the Dijon team looped a header home levelling the score. Things were to get worse for Troyes minutes later when substitute Gregory Thil fired home to turn things around completely. In the space of a minute the match was turned on its head.

Going into the match Clermont were level on points with Troyes and they were to travel to Nancy on matchday 11. Another entertaining match which surely must be of relief to Clermont fans who had to endure a seemingly never-ending series of goalless draws. Nancy, meanwhile, had a new manager on the bench. Pablo Correa made his return to team he left in 2011 after a largely successful nine years. It was not to begin well for the Uruguayan as Clermont took the lead when Thibault Moulin put Clermont ahead on 19 minutes after an intelligent feint left him with a tap-in.

However, a large slice of fortune would fall Nancy’s way. A speculative 35 yard low shot was deflected on the post by Alexandre Cuvellier before rolling along the goal-line before spinning agonisingly over the line.  If that goal was somewhat fortuitous the second Nancy goal was anything but that. A thunderous shot from Jeff Louis made it 2-1 on 53 minutes. Clermont, this season, are not an easy team to beat one single defeat out of ten matches is a great achievement. With fifteen minutes to go Clermont were level Moussa Demeble made it 2-2.  Nancy secured a winning start for their returning manager when Jeff Louis shot bobbled home on 87 minutes. Nancy take the 3 points and look to relaunch their promotion bid.

In the Monday night fixture the season’s surprise package thus far travelled to one of the preseason promotion favourites as Metz went to Brest. The visitors occupied second position on goal difference whilst the Bretons found themselves languishing in mid-table.  Things did not begin well for Brest, a hopeful lofted free kick caused chaos in the box and was headed onto the bar before being headed in off the underside of the bar by Jeremy Choplin after just 12 minutes.  Just before  half time things would get even worse for Alex Dupont’s men. Sakho breaking from his own half surged through the Brest defence and was brought down in the area, the referee had no hesitation in awarding the penalty. Kévin Lejeune finished calmly to double the away side’s lead at the break and ensuring the Brest team left to a chorus of boos. This did spark Brest into some form of reaction but their chances were missed or repelled by the Messin defence. And with an air of inevitability Metz finished the job on 74 minutes when Lejeune turned home. Things would get worse when Bruno Grougi, the Brest captain lunged in unwisely and received a deserved red card. Metz maintained their position on the podium.

Leaders Angers also preserved their top spot in defeating Niort.  They were made to work for their three points by the team from Poitou-Charentes. Angers were lacking a number of first regulars so will be content to have taken the three points. Niort who have had their goalkeeper sent off in their previous two matches welcomed back Paul Delecroix in the net. Niort really should have opened the scoring when Emiliano Sala had the goal at his mercy only to fire wide of the open net. Niort held on against a dominant Angers side. Angers who have had three draws in a row and were on top of the table mainly due to their adversaries slipping up. For the first eighty minutes Angers huffed and puffed just could not find the breakthrough.  In the 82nd minute Ismael Keite glided through the Niort midfield laid the ball off to Jérémy Blayac who curled the ball into the net from the edge of the box, the breakthrough at long last. Their patience was rewarded when less than a minute later Khaled Ayari made it two nil and confirmed the three points and Angers place atop Ligue 2.

On Saturday afternoon Nimes made the long trip north to visit Lens buoyed by their home victory over Caen last time out. A lively first half played out in front of close to 30,000 spectators with both sides going close. Lens who are unbeaten at home this season needed a victory in order to preserve the place in the promotion place were tested by the Nimes side on several occasions. Yet, Nimes would gift Lens a goal and ultimately the victory. A wild backpass from the halfway line was latched onto by Adamo Coulibaly who guided the ball home in the 84th minute.  A disappointing end for a spirited Nimes display.

Tours travelled down to Corsica to play bottom club CA Bastia. They led for most of the match until a crazy end to the game. Bastia went down to ten men when Romain Pastorelli lunged in on the Tours goal-keeper with four minutes of regular time to go. Into stoppage time Bastia looked to have secured a precious point. But much like Bastia’s season it was not to be. Tours made it 2-1 deeper yet into time added on. Tours jumped up to fourth in the table. Level on points with Tours is Caen. Caen who secured a routine if important 2-0 win away at Chateauroux. Istres leapfrogged Chateauroux out of the drop-zone in defeating Arles-Avignon 1-0 at home. Making up the relegation places is Laval who came from two goals down to take a point at home to Le Havre. Finally, in the most mid-table of mid-table clashes tenth placed Creteil went to twelth placed Auxerre. Typical of such a game it finished as a one-one draw.

With the top three sides consolidating their positions and a group of Tours, Caen and Dijon forming the chasing pack two points back the promotion race is slowly taking shape. At the bottom CA Bastia are already six points off safety yet aside from that nothing looks too certain as teams are tightly packed in. Looking ahead to next week’s games- Angers travel to Metz in a top of the table clash which promises to be worth watching. Lens will hope to capitalise on any slips when they go to Clermont. The three teams on 19 points all have decent chances of pulling points on the teams above them.

Labrune and Fanni fall out?