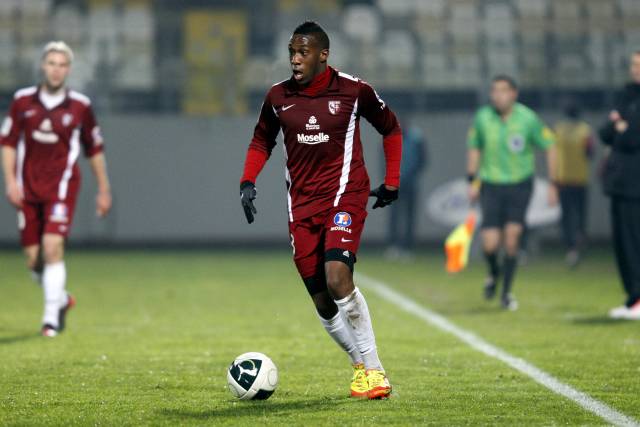 As France celebrating the Toussaint holiday most French people were enjoying a long weekend off work. However, this was not the case for Ligue 2’s players as they were hard at work competing in the 13th round of matches.

During their last match Tours pulled themselves up on to the podium and headed into the game at Auxerre with confidence. Their confidence was misplaced as Auxerre delivered  a performance of quality that belied their lowly 14th position in the table. A first half littered with yellow cards and tackles had the hallmarks of many of Tours’ games, it was very much end to end stuff. The home side would take the lead when Axel NGando’s deflected shot found the net. Into the second period Georges-Paul Ntep  smashed the ball home on 55 minutes. Buoyed by their cup victory at Ligue 1 big-boys Lille in the Coupe de la Ligue Auxerre were high on confidence and it showed as they ran in two more goals Ngando getting his second. The cherry on the cake came when Sebastian Hallier scored an acrobatic overhead volley to seal the rout.

Lens took on Caen in the Saturday lunchtime kick-off and were at it from the get-go as Wylan Cyprien fired home after just two minutes. The beginning of the match was completely dominated by Lens and they took full advantage when Pablo Chavarria headed home on 15 minutes. That would be that for the match as a contest, however Lens did make it difficult for themselves when Pierreck Valdivia was dismissed for a dangerous lunge on 31 minutes. It took until the last five minutes for Caen to come back into contention. Mathieu Duhammel prodding home giving the side from Normandy a lifeline. It was not to be. In fact, Caen would also finish the match with ten men after Laurent Agouazi was dismissed for a late tackle right at the end of the game.

A biblical downpour greeted the players at Brest for their Monday night game with Troyes. Things would not start well for the Breton side as Alexandre Alphonse saw red for a reckless lunge on Marcos. 13 minutes in and down to ten men, not the start envisioned by Brest. Troyes would take full advantage of their numerical superiority when Stephane Darbion’s long range effort found its way into the Brest goal. The shot effectively nut-megged Alexandre Thebaux in the Brest goal. Into the second half Brest were presented with a golden opportunity to recover as Nicolas Verdier transformed a penalty. Both sides had chances to take all the points but neither prevailed. Brest were clearly content with their point at home given the fact they played for most of the match a man down. Troyes were unable to improve their fifth place, Brest remain in midtable, 12th.

League leaders Metz travelled down to Istres looking to consolidate the top spot. Istres meanwhile were precariously placed one point above the drop-zone. A first half that contained chances for each team however it would the visitors that took the lead when Yeni Ngbakoto passed the ball into the net after a well worked cross. Metz would go onto double the score when Gaetan Bussmann’s header looped into the net. Four minute later Metz would concede their first goal in over 3 games. Geoffrey Malfleury was left to apply the finish after a minor goal mouth scramble. Yet Metz were able to see the game out and kept their top spot for another week.

Metz had displaced Angers from the top of the table in the previous week, so Angers were looking to return when they welcomed Arles-Avignon.  Angers got off to the perfect start when they opened the score with the first attack. Rayan Frikeche ghosting in at the back-post to head home. Conditions were difficult and it was the home side who dealt the better with the climatic issues.  A win that should go some way to  arrest the slight slump the Angevins have been enduring in recent weeks.

One of the most surprising scorelines this week was that game involving Laval and Creteil. Laval had only victories to their name and were without one in four matches. Meanwhile Creteil, themselves, have only been beaten twice. These pre-match statistics were born out when the away side took the lead after 12 minutes; Nicolas Belvito heading the ball past the Laval keeper.  Laval missing an absolute guilt edged chance as a sucession of players in orange failed to turn the ball home. Things would be rectified just minutes before the half time interval when Amara Baby turned home a low cross. In the 51st minute Christian Bekamenga scored Laval’s second with his head. Things would get better for les Tangos on 69 minutes as Baby found himself in acres of space and fired past the keeper.  It was at this point that Creteil, simply put, collapsed. Bekamenga helped himself to his second of the night when the keeper somehow was not able to deal with a ball headed back across goal and the Laval striker was left with the simplest of finishes.  The final score finished at 5-1 with the Creteil keeper once more having a hand, quite literally, in the fifth as he palmed the onto Mamadou Diallo to finish the trouncing.

That result did not lift Laval out of the dangerzone as Chateauroux got the result they needed against Clermont. A managerial change had been effected by Chateauroux as they looked to halt their woes. Jean-Louis Garcia, the former FC Nantes player and RC Lens manager was the new man at the helm. Things would begin well for the new man, a decent slice of fortune went his and his team’s way. Maxime Bourgeois took a free kick that was drilled along the ground and subsequently took a noticeable deflection, wrong-footing the keeper on its way into the net. Clermont responded well, without any success though and Chateauroux made them pay. Just on the brink of half-time Kevin Dupuis turned the ball in after a goalkeeper save. In the second half the home side seemed to have rediscovered their mojo that had been lacking this season. They were dynamic in offense, trying a number of long shots. It was only a matter of time before the third goal arrived and sure enough it did. Terence Makengo heading home on 76 minutes. A revitalised and rejuvenated Chateauroux side – will this performance be a one off or will it continue into the rest of the season.

In the other matches- bottom side CA Bastia secured a point at home to Le Havre. Neither side would be entirely content with the goalless game, but one has to start somewhere. Dijon recovered from a mad opening 20 minutes at home to Niort when they found themselves trailing 2-0. They recovered to take a 2-2 draw.  Finally, Nancy continued their recovery with a 1-0 home victory against Nimes.

Looking ahead, leaders Metz welcome Dijon. Angers travel across to face Le Havre; while Lens go to Niort. What could be a very entertaining spectacle is Creteil welcoming Tours; two side with attacking intent and prowess.