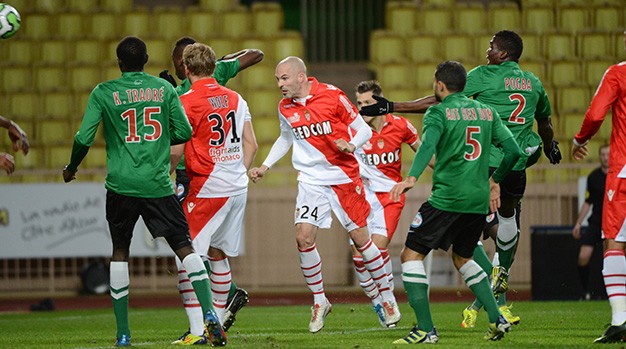 We are delighted to announce that Lee, a specialist on the second divisions of European football, will be writing weekly Ligue 2 reviews for Get French Football News from this day forward. See his round up of the 29th round of fixtures which occurred over the last 4 days:

Monaco twice came from behind to draw 2-2 with fifth placed Angers & are 4 points clear of second place Nantes with nine games remaining. Promotion chasing Angers took a fifth minute lead through Charles Diers but Dirar levelled just after the half hour. The visitors were back in front before the break when Claudio Keseru latched on to a pass from Alharbi El Jadeyaoui, who set up both visiting goals to notch his 17th goal of the season & celebrate his call up to the Romanian national team in style. Monaco fought back & were level just before the hour mark when 3.5 million euro winter signing from Toulouse Emmannuel Riviere scored his second goal for the club, the home side rallied but found experienced visiting keeper Gregory Malicki in inspired form.

Nantes came unstuck in the Monday night fixture at Dijon ending a run of three straight wins, the game started well enough for the visitors as Fernando Aristeguieta capitalised on Dijon Captain Cedric Varrault’s poor back pass to slide Nantes into a 17th minute lead & notch his fourth goal since joining from Caracas FC on loan. Whatever Dijon Coach Oliver Dell’Oglio said at the break had the desired effect as Dijon were level three minutes into the second half through Thomas Guerbert & they took the lead two minutes later when Zakaria Diallo headed home.

A ten minute period for Nantes to forget was complete when Thomas Guerbert grabbed his second of the night as he curled an unstoppable shot into the top corner as Dijon closed the gap on third place to just five points. Nantes miserable evening was confirmed when Aristeguieta missed a point blank header & Coach Michel Der Zakarian was sent to the stands for complaining to vehemently about a strong challenge.

Fourth placed Guingamp welcomed third placed Caen to the Stade du Roudourou in the weekend’s biggest game & it didn’t disappoint in the drama stakes as both sides created chances but the game was won in the very last minute when Christopher Kerbrat fired home following a corner to send all but the 97 visiting Caen fans into raptures as the home players & staff celebrated wildly. Guingamp climb into the automatic promotion spots above Caen by three points although they have played a game more (Caen play their re-arranged game with Istres next Sunday night).

Promoted from the National last season, GFCO Ajaccio are finding life in Ligue 2 difficult & dropped to the foot of the table last weekend following their eight defeat in a row. Thierry Laurey replaced out going Coach Jean Michel Cavalli three games ago but the hoped upturn in form has yet to develop. Friday’s home fixture with Chateauroux fell foul of the inclement Paris weather as GFCO’s home advantage was stripped after the fiery recent affair with Monaco in which the referee was jostled whilst leaving the pitch & needed a police escort out of the Stadium.

Last year fellow Corsican side Bastia were made to play a home game at Creteil & GFCO will do the same this week as the game has been re-scheduled for Tuesday. Le Mans dropped into the bottom three & are showing no signs of leaving anytime soon as they were beaten 3-0 at home to a Nimes side who ended winning at a canter although they were helped on their way to their eighth win in eleven games by the officials who failed to spot that Aurelian Boche was several yards offside as he tapped the visitors into the lead.

Sedan’s recent good form continued with a 2-2 draw at fellow strugglers Arles as the Wild Boars remain six points from safety, it was almost a third win in four games but for a last minute own goal from Emmanuel Kouamatien Kone giving Arles a valuable point. Clermont moved out of the drop zone after a goalless draw at Istres but they were rocked with the news that Cedric Avinel will be out of the side for at least the next two games, Avinel who has played in all but two league games was the victim of an unprovoked attack in the early hours of Sunday morning & was knocked unconscious & will be under observation with the club doctors.

Niort are above the drop zone on goal difference after they suffered a 2-1 loss at Le Havre in a game of two halves at the Grand Stade du Havre, the home sides shoot on sight policy paid off just before break when Yohann Riviere fired home but Niort fought back in the second half & levelled three minutes from time when Greg Houla, a winter signing from CFA side Lucon fired home his third goal for his new side. At this point Niort looked the more likely to win the game but a defensive error led to a Le Havre free kick & Walid Mesloub fired brilliantly past Paul Delecroix to keep HAC on the fringes of the promotion race. Tours & Laval are both still looking precariously at the foot of the table as they fought out a 1-1 draw on Friday & Lens won the battle of the mid table sides as they beat Auxerre 1-0 thanks to a Yoann Touzghar drive eleven minutes from time.