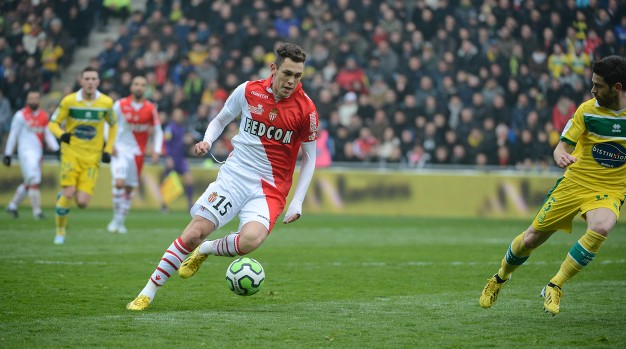 The most eagerly anticipated game of the Ligue 2 season took place on Saturday lunchtime as leaders Monaco travelled North with their four point lead to take on closest challengers Nantes. A crowd of 36471 packed out La Beaujoire including an impressive 577 visiting Monegasque who embarked on a mammoth 1600 KM round trip to follow their team. The home side settled the better & carved out several good chances whilst keeping the lively visiting forward line reasonably subdued & took a deserved lead just before the break when Adrian Trebel fired in a fine low drive which beat Croatian goalkeeper Daniel Subasic & went in off the post. Monaco pushed forward after the break & drew level just after the hour mark when Remy Riou committed the cardinal sin for a goalkeeper & was beaten at his near post by a cross come shot from 18 year old Argentine wonderkid Lucas Ocampos who wheeled away in delight to celebrate with the travelling support, many outlets have the goal attributed to Riou but surely Ocampos will lay claim to it. Nantes pushed on looking for a winner & came close on several occasions but the ended 1-1, a predictable result & one both sides will not be too unhappy about.

Caen & Guingamp seem to swap the third & final promotion place on a weekly basis & that was the case this week as Caen were held to a 1-1 draw with relegation threatened but improving Arles. The visitors arrived having won two of their last three games but fell behind when Alexandre Cuvillier, who had only been on the pitch a few minutes, took advantage of an error from Ludovic Butelle to put the promotion chasers 1-0 up. Arles leveled twelve minutes from time, however, when Romain Rocchi volleyed in a beauty after a free kick was only half cleared. Those dropped Caen points gave Guingamp chance to climb back into third place & that is just what they did with a 2-1 success over second bottom Sedan. Having lost their last three away games Guingamp needed a good start & got just that when Rachid Alioui struck after eight minutes. Sedan leveled before the hour mark through Yoann Court but when you are fighting the drop like Sedan are they could have done without a last minute kick in the teeth that Ladislas Douniama dished out when he bagged the winning goal & gave Guingamp a two point advantage in the promotion race.

Ladislas Douniama: The hero for Guingamp as they went third
[Via MtnAfrica]

If Guingamp were delighted by their late winner then Angers would have been over the moon with their late double which saw them come from 2-1 to collect all three points at Chateauroux & put them just three points from a promotion place. Ayari had given Angers the lead before two goals in as many minutes gave Chateauroux the lead, in the second minute of injury time. St Etienne loanne Yoric Ravet dramatically leveled before Matar Fall scored the winner with practically the last kick off the game leaving the Chateauroux players distraught. Nimes failed to take the chance to keep up with the promotion chasing as they were beaten 1-0 at home to Le Havre. The home side looked lethargic & the visitors who looked sharper throughout took the lead just after the half hour through Geoffrey Malfluery’s sixth of the season in his first league start since early January. With eight games remaining Nimes sit seven points from third place whilst Le Havre’s win leaves them eight points behind Guingamp.

Dijon slipped up in the race for promotion as they could only claim a point from the visit to Auxerre. The game finished goalless & leaves Dijon five unbeaten but seven points behind third place.

With Sedan losing, Gazelec Ajaccio could have leapfrogged over them with a win at fellow strugglers Niort but a 2-1 loss means GFCO have now lost nine of their last ten games. Djibril Konate fired home a 30 yard free kick which left visiting keeper Mbohli rooted to the spot & three minutes later Jimmy Roye tapped home to give Niort a comfortable half time lead. Harry Novillo pulled a goal back ten minutes from time but Niort held on for a vital three points. Local rivals Laval & Le Mans faced up in a big relegation battle with the home side moving four points clear of Le Mans who remain third bottom following a 2-1 loss. Ghislain Gimbert grabbed the winner eight minutes from time notching his seventh goal of the season beating his tally in the last two seasons in the process. Gimbert swept in the winner from close range but the two goals that preceded it were outstanding; Goncalves fired Laval into the lead with a perfectly placed free kick & Le Mans leveled minutes through Omrani whose exquisite turn in the box created room for the equalizer. Tours moved into mid table with a 1-0 success over Istres: Christian Kouakou grabbed the only goal of the game ending a run of four successive draws for Tours & Armand was the hero for Clermont as they picked up a vital three points over Lens giving them a three point cushion over Le Mans.

Villain of the week – Remy Riou, the Nantes keeper only made one mistake but it was costly as he was inexplicably beaten at his near post costing Nantes maximum points against their promotion rivals.

Hero of the week – Ladislas Douniama, with Guingamp missing chance after chance at lowly Sedan, Douniama came off the bench a kept his cool with a vital last minute winner for the promotion chasers.