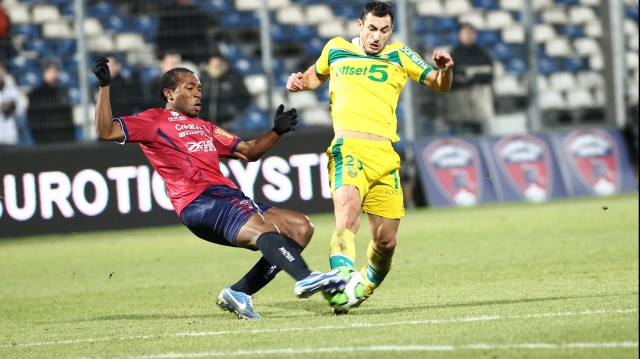 Have a read of Ligue 2 expert Lee’s ever-intriguing round up of last week’s Ligue 2 action, as the season comes to it’s climax:

None of the top four managed a win this weekend as Angers throw their hat into the promotion ring with a fine victory in the Loire derby. Monaco were expected to swat lowly upstarts Niort to one side & strengthen their grip on the Ligue 2 top spot but the visitors stuck to their task & matched the 1-1 draw they played out on their own turf earlier in the season, it was Niort who struck first when Jimmy Roye gave them the lead with a close range header but Monaco leveled just before the break as Lucas Ocampos swept the ball home for his second goal in two games. Monaco charged forward in search of a winner but some fine goalkeeping from Paul Delecroix who was making only his fifth start of the season kept them at bay including a penalty save from Emmanuel Riviere after Tzavelles was brought down to  round off a man of the match performance.

Nantes failed to close the gap on Monaco after a derby defeat to Angers who almost took the lead when Keseru smashed one off the bar following a Riou error, the home side did take the lead on 32 minutes when livewire winger El Jadeyaoui opened the scoring. Nantes task was made more difficult on 52 minutes when Papy Mison Djilobodji was shown a straight red card for a robust challenge on El Jadeyaoui, the tackle didn’t slow the diminutive winger down & he played a part in Angers second goal by supplying a great ball to give Charles Diers a simple tap in & put Angers one point from an automatic promotion place.

Guingamp came into the home game with Clermont having won their last five games at the Stade Du Roudourou but the visitors put an end to that record leaving with a well earned point in a game that ended goalless due to the inspired performance of both keepers, Guingamp stay in the final automatic place despite the draw. Caen made the short journey to Le Havre for the Monday night game having dropped to fifth in the table following the previous day’s games & they ended the night in fifth place after conceding a late goal to draw 1-1. Caen took a first half lead when Le Marchand took out Nabab in the box & Duhamel’s luck was in as his poorly placed penalty crept in, in typical derby fashion the game descended into a scrappy, bad tempered affair but home side began to dominate & deservedly pull level 9 minutes from time when Koita headed home. Neither side could grab a winner leaving Caen two points behind third & Le Havre eight points behind.

Nimes were best equipped to make a challenge for a promotion & they made the short trip to four unbeaten Arles looking to take advantage of dropped points from teams above them & all began well when Vincent Gragnic put the visitors ahead from the spot with his 14th goal of the season, the game however turned on the crazy actions of Nimes stopper Cyrille Merville who inexplicably charged out of his area on 26 minutes & pole axed the onrushing Montpellier loanee Jonathan Tinhan Harold Schumacher style earning himself a fully deserved straight red card. Every game this season Nimes Coach Victor Zvunka has had a reserve goalkeeper on the bench apart from this one as he decided hours before the game to have an extra outfield player so Midfielder Mohamed Benyahia took over in goal & was rarely troubled until Raphael Caceres fired home to level the scores from close range, Nimes came closest to claiming all three points late on but surely Zvunka will regret not having a substitute goalkeeper on the bench.

Dijon were also held as they missed out on the chance to gain ground, visitors Chateauroux had lost six of their last seven away games & had failed to win on the road all season but took a second half lead following string of missed Dijon chances when Diallo Guidileye crossed for Clement Tainmont to slide home from close range. Chateauroux held on until 13 minutes from time when their hopes of a first away win were dash as Romain Phillippoteaux, a winter signing from Le Pontet had time to control the ball in the six yard box before chipping in his second goal for Dijon. Both sides had late chances to win the game, Chateauroux hit the bar & Dijon had two shots cleared off the line in an exciting end to the game.

Gazelec Ajaccio are still twelve points from safety after they drew 0-0 with Auxerre in a dour affair in Gueugnon, the highlight of the game was the pushing & shoving between Marco Ramos & Nicolas Verdier which saw both players dismissed in injury time.

Sedan are still nine points from safety following a 2-2  draw in Lens but the visitors will feel they did enough to win the game & led 2-0 at one stage through a Yahia own goal & a Diallo penalty harshly given for handball. The Lens fightback stated just before the break when Yoann Touzghar scored his ninth of the season with a fine finish from the edge of box & despite several chances to finish the game off Sedan conceded a harsh penalty of their own & Touzghar made no mistake taking his tally to double figures in the process.

Le Mans had a meeting with the DNCG to discuss their future on Thursday & 24 hours they did their on pitch future no harm with a hard fought 1-0 win over local rivals Tours who arrived on a 6 game unbeaten run. The home side won the game thanks a great goal from Joseph Mendes who showed great strength in holding two Tours players off before embarking on a fine run which ended with him chipping visiting keeper Leroy for the game’s only goal. Le Mans stay in the bottom three but are now just one point from safety.

Two relegation rivals clashed as Istres welcomed Laval, the visitors arrived on the back of a four game unbeaten which has seen them climb into a position of safety & they took the lead through the goal of the weekend as Ludovic Gamboa hit an unstoppable half volley past Dennis Petric in the home goal. Istres were back on level terms soon after as Barillion scored from the spot following a Gaetan Belaud handball before they took lead when Guy Roland Niangbo tapped home his fifth of the season, Laval deserved at least a point & they got that when yet another harsh penalty was given for handball & Julien Viale made no mistake leaving both sides two points above the relegation zone.

Hero of the week: Alharbi El Jadeyaoui, scored the opening goal in Angers 2-0 win over promotion rivals Nantes & the tricky winger set up the second goal & generally tormented the visitors defence at every opportunity.

Villain of the week: Cyrille Merville, The Nimes keeper knew full well there was no reserve goalkeeper on the bench which makes his decision to race out of his box to assault an onrushing forward more baffling.

Ethan Mbappé, the younger brother of Kylian Mbappe, called up for France under 16s