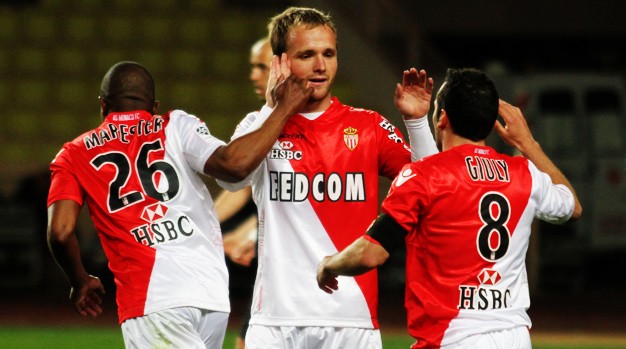 Another excellent weekend of Ligue 2 football was rounded off by likely title winners Monaco impressively seeing off Clermont 4-0. Catch up with all the action thanks to Ligue 2 expert Lee’s review:

Monaco took a step nearer Ligue 1 with a 4-0 win over lowly Clermont on Monday night & extend their lead over fourth place to ten points & with just five games victory over Sedan next Monday could seal promotion depending on other results. Valerie Germain gave Monaco an early lead & from then on in their was only ever going to be one winner, at times it looked like a training exercise such was Monaco’s dominance. Ocampos hit a post before Nabil Dirar somehow found the net from the acutest of angles on the stroke of half time. With 19 minutes remaining young defender Antoine Jouan who was making his senior debut was dismissed for bringing down Monaco’s Yannick Ferreira-Carrasco who would have been clean through & Monaco added two more before the end, Lucas Ocampos scored his third goal in four games with another of his trademark goals where he cuts inside & fires into the far corner & Emmanuel Riviere rounded off the scoring three minutes from time after he was played in by the impressive Dirar. Clermont sit two points above the drop zone with a visit to Nantes up next.

Nantes missed the opportunity to close the gap on Monaco to two points as they played two days before the leaders, the home side were looking to build on last week’s 4-0 win at Chateauroux & all looked like going to plan heading towards half time with Nantes leading thanks to a wonder strike from Serge Gapke who picked the ball up just inside the Auxerre half before letting fly from 25 yards giving Sorin no chance. Against the run of play Auxerre levelled on the stroke of half time as Rudy Haddad whipped in a free kick that evaded everyone & found the corner of the net. Nantes went for the jugular in the second but like Monaco last week found Oliver Sorin in top form & even a crazy decision to awarded Nantes a penalty couldn’t deny Sorin the Man of the Match Award as he silenced the 25750 crowd by easily saving Djordjevic’s spot kick.

The coveted third place seems to shift hands on a weekly basis & this week was no different as Guingamp moved back into an automatic promotion slot just one week after being overtaken by Angers. Guingamp started the home game with third bottom Le Mans with a very attacking line up & it paid dividends with a resounding win. The home side took a 20th minute lead through Thibault Giresse & five minutes later Mustapha Yatabare headed home a free kick to make it 2-0. The visitors day was to get worse on the hour mark when Morgan Sanson left his foot in on Lionel Mathis & picked up a second yellow card, however they pulled a goal back on 67 minutes & it was the goal of the game as Idrissa Sylla beat a couple of defenders before smashing home a 20 yarder past Mamadou Samassa. Le Mans were back in the game for less than 60 seconds as Yatabare scored his second & eighteenth of the season before Ladislas Douniama tapped home Yatabare’s mishit shot to make it 4-1 just three minutes later. Two more goals followed as Le Mans collapsed late on, Fatih Atik tapped in after Douniama’s shot had been parried & Substitute Cedric Faure rounded off the scoring with the sixth goal with another near post header leaving Le Mans firmly rooted in the drop zone.

Angers drop to fourth after drawing 1-1 with fellow promotion contenders Caen, the visitors arrived having lost just one of their last eleven games whilst the home side had won four of their last five home encounters. Angers hit a post before Caen opened the scoring as Mathieu Duhamel nipped in front of Malik Couturier & expertly flicked the ball past Malicki in the home goal. Caen youngster Lenny Nangis almost made it 2-0 buy Malicki belied his years & pulled off a fine save before Angers levelled with eleven minutes left when Khaled Ayari fired home with an acrobatic shot  from 15 yards, Angers pushed on looking for a winner but they couldn’t break through despite visiting defender Nicolas Suebe picking up a second yellow after an altercation with most of the home side following a late challenge. Angers are three points behind second placed Nantes & Caen four points & a nerve wracking final few weeks is in store.

Both Nimes & Dijon kept their faint hopes of a third placed finish alive & both remain six points behind Guingamp after recording victories, Nimes had former Sedan & Reims front man Vincent Gragnic to thank for a 2-1 win at Lens he struck twice to put the visitors 2-0 up & despite a late first career goal for 17 year old Belgian forward Baptiste Guillaume Nimes held on for a vital win.

Dijon left it a bit later to stay in the hunt with a last minute Florin Berenguer goal against a brave Laval side, the visitors who need points themselves to climb away from the foot of the table hit a post & brought the best out of home keeper Baptiste Reynet before Berenguer’s late left foot strike gave Balijon in the Laval goal no chance.

Gazelec Ajaccio were officially relegated back to the National in the unfamiliar & almost empty surroundings of the Stade Jean-Laville in Guengnon after a late goal for Tours sent them down. Prince Oniangue headed the only goal of the game four minutes from time in a game of few chances. Idriss Saadi’s clever overhead kick was GFCO’s best chances but Ben Leroy was alert to Saadi’s quick thinking.

Sedan have found an upturn in form in recent weeks but they really need wins in the latter stages of the season & although they picked up a good point at Le Havre they are still six points from safety with just five games remaining, The Wild Boars were second best in the opening 45 minutes & fell behind when Walid Mesloub finished from the edge of the box after a fine run but the visitors upped their game in the second half & levelled four minutes in when Florian Pinteaux broke down the left & finished with a powerful shot. It was all Sedan from then but the squared several gilt edged chances to win the game but record valuable point on the teams above them.

Chateauroux had dropped down the table after six games without a win & welcomed fellow strugglers Niort who had picked up points from games against Monaco & Angers recently. The game was won thanks to a hugely debatable penalty given for handball & scored by home forward Akim Orinel & the match officials angered the visitors yet further when they had a goal chalked off by a raised flag, Niort are two points ahead of the third bottom Le Mans whilst Chateauroux have a four point gap.

Istres made the short trip to six unbeaten Arles but returned pointless & they slip below their rivals in the table although both sides should feature in next season’s Ligue 2 calendar. Former Nantes striker Maurice Dale won the game in the 23rd minute when visiting defender Fabian Barillion dallied on the ball & then fell over it allowing Raphael Caceres to square the ball to Dale for his fourth goal of the season. Arles restricted the visitors to long efforts which Ludovic Butelle dealt with comfortably as the game ended amid frayed tempers.

Hero of the Week: Oliver Sorin followed up a sensational performance between the sticks for Auxerre last week at Monaco with another one to deny Nantes all three points at La Beaujoire.

Villain of the week: Filipe Djordjevic is so often the hero for Nantes, the Serbian is top scorer with 17 goals but fluffed his lines from the penalty spot against Auxerre & denied Nantes some much needed breathing space on the chasing pack.

Edinson Cavani: What to Expect if PSG Come for Him