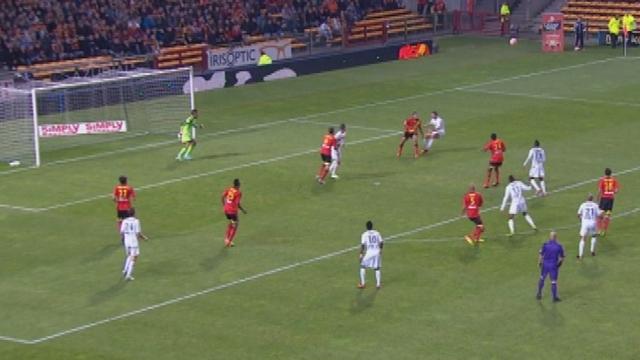 Simon Scutt brings you all the latest happenings from the 2nd division of French football. An extremely entertaining game between RC Lens and FC Metz undoubtedly the highlight of this, the 9th game-week of the season.

On Friday night game-week nine kicked off, a mere 72 hours after game-week eight’s drama. An intense period of 3 games in a week left the league well and truly up and running as we approach the end of the first quarter of games this campaign.

We start with the Loire derby (well, one of them) as leaders Angers welcomed third placed Tours to the Stade Jean Bouin. The game started with gusto as both sides hit the woodwork in the opening exchanges.

Tours suffered a setback in the first period as they lost their goalkeeper Benjamin Leroy, injured in a collision with Angers’ Mohamend Yattara. Tours would go on to recover well though. They opened the scoring with a quick incisive counter attack on 28 minutes. Christian Kouakou pouncing on a long ball and beating Malicki in the Angers net. It remained thus until the break. Angers brought on Alharbi El Jadeyaoui the player who delivered the most assists the year previous. Shortly after the break Angers were level. A long range free-kick was back-headed from the edge of the box by Romain Thomas who deviated the ball sufficiently to deceive the keeper. Angers who had a 100% record at home going into the match were held 1-1 by Tours as the men in black and white could not find a winner.

Dropping to the opposite end of the table, CA Bastia, twentieth took on eighteenth Laval. Laval, however, have won two of their last three with good home victories over Angers and Brest. CA Bastia were yet to win this season and in desperate need of three points. It was Les Tangos that made the breakthrough in a decidedly low-quality first half: Sebastian Renouard with a good headed finish just before the half time whistle.

Bastia did respond in the second half in-front of a sparse crowd. It was Romain Pastorelli whose dinked finish crept over the line off the post depriving Laval of a priceless away win. There was time left for Selim Ben Djemia to pick up two yellow cards in ten minutes as Laval were forced to settle for a draw. A result that doesn’t really suit the Corsicans but is at least something for Laval on the road.

Another newly promoted side, US Creteil made the trip the farthest corner of Brittany to take of Stade Brestois. After a level opening first half hour it would be the Bretons who took the lead, Nicolas Verdier cutting in from the right and side-footing the ball home.

Creteil came back strongly and equalised on 63 minutes when Christophe Diedhiou turned in a parried free-kick. Things would get worse for Brest 15 minutes later when a well-worked 1-2 left Jean-Michel Lesage to fire home. Both sides continuing their starts to the season; Brest disappointing and Creteil impressing.

In Monday night’s game Lens took on Metz. Les Messins riding high in second place after their big derby win over Nancy in midweek. Lens, meanwhile, were level with Tours in fourth. After open early exchanges it would be Metz who struck the first blow.

Diafra Sakho latched onto Nicolas Favergue’s long ball before beating the Areola in the lens goal with a cool finish. The lead would last half an hour before Lens hit back with both keepers being testing in that period. However Lens were beginning to dominate, and so it proved when Yoann Touzghar equalised, poking home a long ball he delightfully control on the edge of the box.

Into the second half when a free kick whipped into the box beat all the Metz defenders and Jean-Phillippe Gbamin was left to execute an easy close range finish. Metz were nearly punished again as Karim Lancina slipped over letting in Danijel Ljubola. Fortunately for Metz the other defenders and goalkeeper were able to recover and block out the effort.

In fact, it was to be Lens who were punished for their profligacy. Gaetan Bussman struck a high hanging cross which was headed in at the back post by an, unmarked, Kévin Lejeune. Shortly after Lens would strike the final blow in an entertaining game. Pablo Chavarria received the ball on the edge of the box before his shot took a large deflection of the defender and completely wrong-footed the keeper. 3-2 at the end of all the twists and turns.

There was a Normandy derby on Friday night when Le Havre went to Caen. The home side aiming to climb onto the podium. The match was played out in a raucous atmosphere but in the first half it was the away side that should have been ahead. Damien Percquis in the Caen goal was the saviour.

The second half saw Caen come back into the match a little but the major incident of the match took place in the last ten minutes. Zargo Toure was adjusted to be the last man and thus received his marching order. This resulted in a penalty which dispatched wonderfully by Faycal Fajir. It proved to be the only goal of the game, Le Havre were not happy with the decision and Toure was shocked when he saw the card produced.  This result put Caen into out-right third a point behind Lens who took second.

In the other games, Chateauroux belied their league position with a comprehensive 3-0 disapatching of Niort. Dijon edged past Auxerre 1-0. Troyes made easy work of Istres thanks to a five minute burst in the first half. Istres would be reduced to ten men with a late red card. Nancy could not avenge their derby defeat as they were held at home by Arles-Avignon in a goal-less draw. Finally, Nimes salvaged a point at home to Clermont with a last minute goal.

The top three as it stands is Angers (18 points) Lens (17 points) and Caen (16 points). The podium teams starting to pull away, slowly if that. Down at the bottom. Chateauroux pulled themselves out of trouble and have been replaced by Istres. CA Bastia prop up the table on 4 points, Laval sit above them with 7 points making up the bottom three.