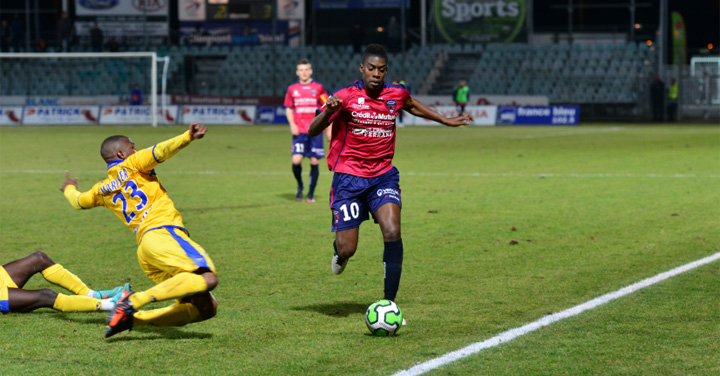 Europe’s second division expert David of Below the Top League gives you the lowdown from another entertaining weekend of Ligue 2 action.

Another high scoring weekend in Ligue 2 with no fewer than 30 goals over the weekend. Caen, Angers and Clermont still hold a 100% record.

Caen made easy work of Creteil with a 3-0 win. Mathias Autret gave the hosts the lead on 23 minutes with a low drive, and the game was as good as over before half time, Ibrahima Seck turning the ball into his own net from a corner. Mathieu Duhamel put the icing on the cake 11 minutes from time, turning in a cross from 5 yards out.

Angers had to come from behind away at Dijon to record their third win in a row. Thomas Guerbert putting the home side ahead after just 6 minutes. Charles Diers levelled the game up on 22 minutes. It stayed that way until the 73rdminute, with Khalid Ayari converting a penalty. Jeremy Blayac made it 1-3 in injury time. Dijon are still looking for their first win of the season.

It required a last minute free kick from Yannis Salibor to secure Clermont’s third straight win against Laval. Christian Bekomanga gave the visitors the lead on 32 minutes, but an own goal from Malik Coutier five minutes later restored parity. Mana Dembele and Miodrag Stosic were shown their marching orders before half time for a clash between the 2. It looked like a share of spoils was on the cards until Salibor curled in a free kick from 25 yards out. Laval are the only side in Ligue 2 without a point to their name.

Tours travelled to local rivals Chatearoux and ran riot; Tours were 2 up before half time, with 2 goals in the space of 2 minutes by Christian Kouakou and Julien Cetout. Billy Ket Keophomphone made sure of the points in front of a restless home crowd. Remi Fournier’s own goal 6 minutes before time adding insult to injury.

Metz ensured they kept their 100% home record with their second 1-0 win in a row at the Stade Saint-Symphorien. Diafra Sakho scoring the game’s only goal on the half-hour mark. Le Havre won their first point of the season away at Niort. Maxime Le Marchand handing the hosts the lead 13 minutes in. Niort were on course for their first win of the season until Greg Noula scored a 66th minute free kick, condemning the hosts to their third straight draw.

Istres and CA Bastia also played out a 1-1 draw. It was looking good for the visitors as Romain Pastorelli was fouled in the box in the 18th minute, which saw Fouad Chafik get his marching orders for. Last seasons top scorer in the National dusted himself off and converted the penalty. Istres attacked straight from kick off and equalised through Bagily Dabo. CA Bastia couldn’t make their man advantage count, and with 8 minutes left were also reduced to 10, with Adrian Monfray taking a slightly earlier bath after 2 cautions.

Nimes won their first game, handing a first defeat of the season to Troyes in the process. Mouritala Oguobiyi gave the hosts the lead on 17 minutes, Troyes worked hard to get back into the game and their work paid off when Ghislain Gimbert equalised. But their work was undone before half time, Ryan Nouri putting Nimes ahead going into the interval. Vincent Gragnic made it 3-1 on 55 minutes and cruising to a victory, even a second Troyes goal from Jimmy Cabot with 17 minutes left couldn’t stop them.

On Saturday Lens put 4 past Auxerre, with a scintillating first half performance. It was the visitors who took the lead however. A free kick on the edge of the box from Jamal Ait-Ben-Idir went across the face of goal deceiving everyone. After that though, it was one way traffic from Lens, with Yoann Touzghar picking up a fortunate through ball and firing low into the bottom corner. On 20 minutes it was 2, Pablo Chavarria with an easy header from 3 yards out. Danijel Ljuboja had the easiest of finishes on 26 minutes after the Auxerre defence couldn’t deal with the second ball from a Lens free kick. In the second half Auxerre came out swinging and guilty of wasting chances to get back into the game, and were punished for this when on 73 minutes a shot from Chavarria, with the aid of a wikid deflection looped over defence and ‘keeper to make it 4-1.

The Monday game saw Brest travel to Nancy. A stunning half volley from Brest captain Bruno Grougi on 37 minutes was enough to ensure their second win on the spin. Despite the effort of the hosts in the second half they couldn’t put the ball in the net.