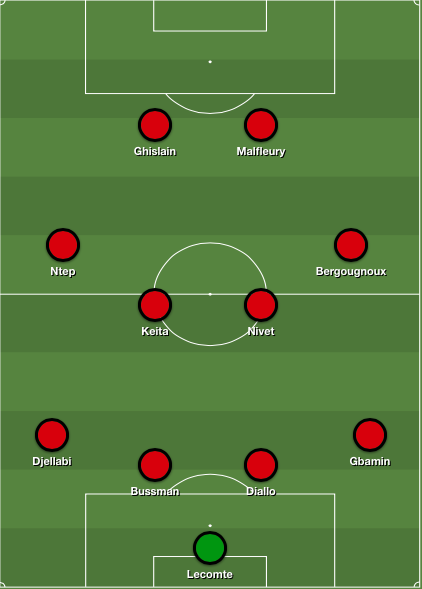 Welcome to a new feature here at Get French Football News. Simon Scutt introduces to your our weekly feature, Ligue 2 Team of the Week. Let’s see who made it this time out!

Dijon entertained Nancy on Friday night and with Nancy being a run of four straight victories this would not be easy for a good Dijon side. The first half brought about precious little in terms of action but the Dijon keeper would need to be very much on his toes in the second half. He produced a series of good saves to keep Nancy at bay. The former Lorient man has been in good form for his new club as he has only let in six goals since September.

Lens welcomed Chateauroux to the north of France on Saturday lunchtime in front of close to 30,000 spectators however they were unable to break through the Chateaurox backline. Until that is the 51st minute when the 18 year old defender Gbamin found himself in front of goal thanks to a lovely flick. Gbamin is experiencing his breakthrough season and that was his second goal to prove it.

Sealing the victory for Auxerre was a great strike by Frederic Sammaritano but this came from a wonderful cross from left back Karim Djellabi. The former Angers and Nantes player was his surging attacking self. While he won’t be happy that the Auxerre defence conceded two goals he rectified that in the best possible way.

Another key part of the strong Dijon defence is Zakaria Diallo. He helped his Dijon side to keep a clean sheet against on-form Nancy and in doing so survive the second half onslaught. Diallo has been everpresent for Dijon this season in helping them achieve the second best defence in Ligue 2 and would have enjoyed his evening on Friday night.

Metz sit pretty top of the  league after a simple 2-0 victory in Corsica against CA Bastia. Not only have they accrued more points than the other teams thus far they have also conceded the fewest goals, 10 to be precise. At the heart of this run is Bussmann a product of the clubs academy and is now establishing himself in the first team, ever-present this season. While bottom club Bastia were beaten well and evidently there was certainly work to do for the Bussmann and the Metz defence.

Ligue 2’s leading assist maker was at It again on Friday night at Creteil. His exquisite pass cut the Creteil defence in half leaving Ghislain Gimbert to do the rest. The second goal coming in the 76th minute all but sealing the three points for ESTAC. Nivet who enjoyed his season in Ligue 1 last year netting ten goals and he looks set to repeat that this year.

Making your professional debut cannot be easy, all the perceived pressure from your teammates, coaches and the fans. The fans- performing in front of  large crowds of people can do strange things to people. If you are due to make your debut and are a bit worried about the screaming mass of people watching you may I politely suggest you make your debut at Istres. The vital bottom of the table was played out in an essentially empty stadium. Naby Keita obviously enjoyed himself as the 18-year old Guinean scored and set up one in Istres 4-2 victory over Nimes.

Auxerre vs Caen was a crazy ‘match de follie’ on Monday night in Burgundy. Caen found themselves two goals to the good after a half an hour only for the home side to bring it back to parity on half time; before going on to take the three points. Key to this victory and the undoubted star of this Auxerre side is young Ntep who class on the left flank brought about both of Auxerre’s first half goals. Using step-overs effectively before playing the ball into the box for the strikers to do the rest.

In terms of having an effect on the outcome of your team’s match Bergougnoux can be said to of saved his team from the ignominy of a home defeat to lowly Le Havre. He converted confidently the first half penalty before using trickery from the right hand flank to set up Baptiste Santamaria to equalise.

The former Laval man is enjoying life at Troyes this year. He has already bettered his goal tally from last season and every other season of his professional career. His goal this week came from Nivet assist and Gimbert made no mistake in using all of his sang-froid to fire home. He is sitting atop the Ligue 2 hotshot list , returning there after a month firing blanks.

Somebody else who clearly had a good week was Geoffrey Malfleury, seeing as he scored a hatrick. The first goal was a power strike from just outside the area which the keeper could not keep out. The second was the result of wonderful trickery taking him past defenders before slotting home. The third was another powerful finish from the edge of the box. Istres stay in the relegation zone but are now level on points with Nimes.