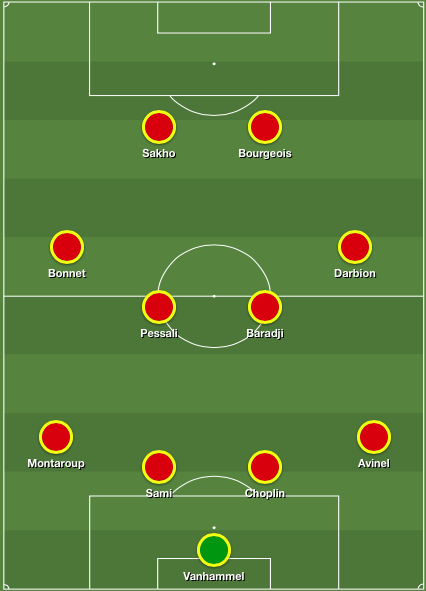 Things are looking up for the Tangos and they took three vital points away from home on Friday night at Niort. This was down in no small part to their defence and the goalkeeper, Vanhamel. Laval took the lead in the 12th minute and were then under the pump for most of the remainder of the match. Their resistance incorporated several flying saves from Vanhamel and a fair few last ditch parries. Laval becoming the first team to win at Niort this season.

Clermont climbed up to sixth position on Friday with a late victory against Brest. Clermont kept things tight at the back while doing their best to push on and attack. They obtained a late penalty for their efforts and took all the points against a troubled Brest side.

With Metz’s continued success they kept another clean sheet, they now have the best defence in the league, they have only conceded ten goals. Choplin has been an integral part of the defence. The former SC Bastia player has led his fans to begin dreaming of a double promotion.

Nancy welcomed Lens to Lorraine in the Saturday lunchtime kickoff for what promised to be a decent spectacle and so it was; without being high-scoring that is. Nancy kept Lens at bay whilst taking the main chance of the game, when they were presented with a penalty at the end of the first half. Sami helped his team mates keep the clean sheet and see out the victory. Notably, when his blocked deflected a free-kick passed the post.

Some thirteen minutes later in the aforementioned match the Caen supporters would be sent into raptures by Montaroup’s equaliser. An absolute rocket off his left foot that shot past Malicki in the Angers goal. Mathieu Duhammel provided the assist with a loft ball across the eighteen yard box and an on-rushing Montaroup whose flying volley was undoubtedly the goal of the weekend in Ligue 2.

Baradji opened his account for the season on Friday with a low driven shot from outside the area, this enabled Dijon to equalise at Nimes and maintain their good run of form. Dijon have only lost once since the beginning of September and will hope to turn the draws into victories to push the team up the table.

Le Havre helped themselves to an important victory over Creteil with Alexandre Bonnet playing an important role with two assists. His near post corner was flicked into the net by Yoann Riviere, setting them nicely on their way.  Then his lofted pass allowed Mickael LeBihan to secure the result and the precious three points for his team.

Another player whose free-kick delivery was important in his team’s match this week was the young Brazilian midfielder  Jonas Pessalli. Pessalli’s delivery was met by the head of Romain Thomas to give Angers the lead as early as the fifth minute at Caen.  This was Pessalli’s only third match in Ligue 2 as was only in the starting eleven this time due to a growing number of absentees for Angers. His performance may well convince his manager that he is worthy of more game time.

Whilst Troyes will be disappointed with their performance, losing at home to Tours was not their plan going into Friday night’s game. Darbion did his utmost for the cause bringing his team back into the match with a free-kick that deceived everyone and nestled into the Tours’ net.

Istres went to play Chateauroux on Friday in an all important bottom of the table clash. Chateauroux were indebted to Bourgeouis as he was involved in both of their goals in the 2-0 victory. His thirteen minute salvo allowed Chateauroux to take the three points.

Part of Metz’s fantastic run has been based on the goal-scoring prowess of Diafra Sakho. This run continued in Monday night’s fixture at home to Auxerre when Sakho fired his second double of the season.  Sakho has been involved in half of Metz’s last ten goals and he has retaken top spot in the Ligue 2 goal-scorers chart.

Yacouba Sylla: ‘I am feeling good’