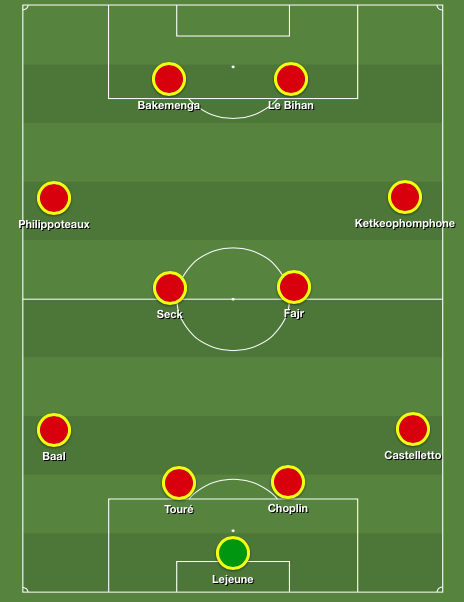 While the goal-less encounter between Istres and Nancy may not have been the most thrilling of encounters, it still required a strong defensive performance from the young Istres ‘keeper Lejeune and his defence. They took a point against a strong Nancy side who have only lost once side the end of September.

Castelletto a recent capped French under-19 international made his first league start at home to Niort on Friday night.  Full of attacking verve in this young Auxerre side he was seen regularly to be bombing forward. While he didn’t produce anything to count a personal success his side saw of the threat of Niort and conserved their position in mid-table.

For a club that has not enjoyed a memorable first half of the season to win away at a promotion favourite and to do so whilst keeping a clean sheet is all the more impressive. So praise must go to their defence. Touré a near ever present for the Normand side he played an important role in keeping last year’s Ligue 1 team at bay.

Making the TOTW alongside his young team mate Castelletto is experienced centre half Adama Coulibaly. In what is a inexperienced Auxerre side Coulibaly marshalled the defence well and stopped Niort from taking the lead in the first two-thirds of the game. This allowed Auxerre, with their exciting attacking options, to win the game in the final half an hour.

An ever present this season for les sang-et-ors  Baal picked up his first assist of the season at Angers on Saturday lunchtime. As his team scored a valuable victory away from home, only their second of the season. What’s more it came against a direct promotion rival. The lens strikers, Touzghar and Ljuboja scoring either side of a Yattara goal for Angers. A victory made all the more impressive due to the very strong trend for home wins in the lunchtime Saturday kick-offs, (12/19 home wins before this game)

Ibrahima Seck gave Creteil the perfect start when he fired home in the very first minute of their clash against Arles-Avignon. Creteil have surprised many people and find themselves in 11th place with all but half the season gone. They would go on to draw with Arles after the side from the south of France equalised with a little over ten minutes remaining.

Caen made the trip into Corsica to take on bottom club CA Bastia on Friday night and they certainly brought their shooting boots with them, winning 5-1. Thanks in no small part to Franco-Moroccan playmaker Fajr, author of two assists and a goal helping the side from Normandy to climb up to seventh place. Fajr is enjoying a productive season contributing six goals and eight assists to the Caen cause.

Probably one of the more expensive names to have printed on your replica shirt Billy Ketkeophomphone may well have tempted a few Tours fan to do so after his display against leaders Metz (4-2) He equalised in the 18th minute before adding a second in the 90th minute hence assuring his side of victory, which put Tours back on the podium. Metz had not conceded since the first of November, so it really is some achievement for tours to put four passed the leaders.

Philippoteaux helped his side preserve their impressive home record,  no defeats since mid august, on Monday night. His strike was sufficient to give Dijon the three points as they look up at the sides above them. He had something of an all-action match; he hit the post and missed another chance to seal the victory in the first 45’ before doing so in the 66th minute. His influence was telling in a tight encounter, Dijon move up two places into fifth.

When you are languishing down in the bottom reaches of the table one thing can turn your fortunes quick-smart is a goal-scorer; Laval seem to have found one.  Laval took on Chateauroux both sides hovering precariously above the relegation zone played out an exciting game in which draw suited no-one sufficiently. Bakemenga scored his ninth and tenth goals of the season cancelling out the Chateauroux opener and but for a 94th minute equaliser might have given Laval three important points. For Bakamenga he is now second in the Ligue 2 top scorers chart, Laval will hope he continues this form.

Le Havre scored an important three points at Troyes, they move from 16th to 13th in the table. Thanks to a Mickael Le Bihan winner in the 57th minute which was his third of the season.  Le Havre were able to upset a out of sorts Troyes side. Le Havre now have two successive victories and have ended a worrying streak without winning

Djibril Cissé in talks to return to France