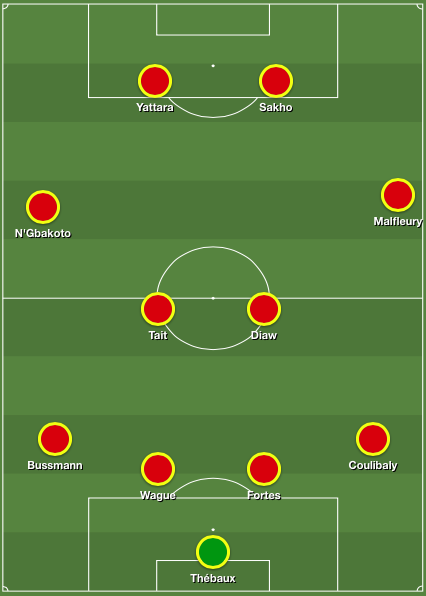 A very merry Christmas Eve to you all as Simon Scutt presents you with the final Ligue 2 Team of the Week of 2013:

Brest travelled across the northern quarter of France to take on Caen. Caen who put five past CA Bastia last week and possess the league most lethal attack. So Brest, languishing too far down the table for their fans, were facing a tough task. However, thanks to Thébaut they left caen with a point and a clean sheet. He made save after save repelling the Normans, he really did put on a goalkeeping clinic.

Metz have suffered two consecutive defeats (one in the French cup to Creteil and last week’s 4-2 reverse at Tours) and were looking to react. Both defeats were suffered away from home and Metz home form is excellent, eight wins and two draws all season. They continued their good home form with a win against a good, if up and down, Troyes side. Bussmann was involved in the build-up play for the only goal of the game and kept another clean sheet at home- they have only conceded three goals in said ten games at the Stade Saint-Symphorien.

While Caen’s attackers may have felt a little disappointed with the fact that they could not breach the Brest defence Caen’s defenders must be content with a fifth clean sheet of the season. Wague recently returned to the Caen side after a period out of the side. Caen will look to return to their free flowing attacking football after the winter break, they travelled to Tours in the first league game back in January.

Another team with a fearsome attack record this season is Tours. Tours travelled down south to play Arles-Avignon. Arles have the best defensive record in the league and are unbeaten at home. The Parc des Sports is becoming a fortress. Arles do well to nullify teams at home, their games are seldom goal-fests. Nonetheless this Tours side put four past leaders Metz last week and have the third best away record in the league. Young centre-back Steven Fortes was at the heart of the Arles defence as they kept another clean sheet.

One of the more surprising results of the week was Chateauroux defeating Dijon 3-1. Chateauroux knew they needed a result after Istres’ shock win at Lens on Thursday night and they duly delivered. The match descended into craziness in the final 5 or so minutes when three goals were scored. Yet, before that period of madness came a moment of class from the young midfielder. He chipped the Dijon goal-keeper from approximately 25 metres out with a delicate lobbed finish. Chateauroux go into the winter break safe albeit just 2 points ahead of Istes in 18th. Dijon, meanwhile dropped down 2 places to 7th.

Niort secured a good three points at home to Creteil on Friday night, it was something of a routine victory by the end of the night. Things got going in first half stoppage time when experienced midfielder Mouhamadou Diaw and Niort captain scored a nice looked, if slightly deflected volley. Niort retain their mid-table security as do Creteil. It is safe to say that both sides will be content with their positions in the Ligue 2 table.

As mentioned above there was a shock result on Thursday night when Istres, stuck in the relegation places for most of the season went to Lens who had not lost at home all season and won 2-1. It was a result they deserved having largely dominated the match. Istres striker Malfleury got the goal that Istres deserved after 59 minutes of the game. Yet Istres go into the winter break in the bottom three two points adrift.

Teaming up along the left flank for league leaders Metz on Saturday lunchtime were Ngbakoto and Bussman. They were responsible for the sole goal of the game. Moreover Ngbakoto was the best player on the park for Metz. He is clearly enjoying Ligue 2 this season, he has scored 5 goals and also has 2 assists to his name. Metz sit seven points clear at the top of the league and were crowned winter champions. Not bad for a newly promoted side.

Angers travelled down to Nimes on Friday night and dispatched Nimes with ease. Two goals in 3 minutes in the first quarter of an hour of play was sufficient to take the three points and leaving Angers in second before the break. Yattara scored the first of the two goals firing home from a tight angle. The forward, on loan from Lyon, scored his sixth of the season. Nimes remain in the bottom three, dropping to 19th. Even a change in manager has not seemed to have halted the slide.

Ligue 2’s top goal scorer was at it again for FC Metz when he put his 12th of this season taking the three points to stretch their lead at the top of Ligue 2. The finish was no nonsense and Sakho continue his lethal streak in front of goal. The 23 year old has been one of the standout performer in this Metz side that continues to surprise. A fantastic story nonetheless as one of French football’s traditional and historical powerhouses seem to be returning to the big time. Such as Nantes and Monaco last season and Lens look to have turned a corner this season.