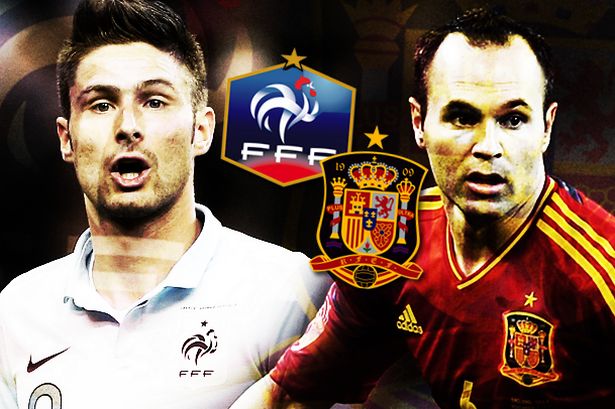 21.53: Thank you very much for tuning in with us tonight.

21.51: FT: France 0-1 Spain. Congratulations to Spain, who exploited France’s defensive frailties down both flanks with Evra and Jallet looking slightly suspect at the back. France had two glaring chances, but Valdez impressively denied both Evra and Ribery. France will probably now have to win a play off in order to progress to the World Cup in 2014 unless Spain drop some points.

21.43: WHAT A CHANCE: Valbuena’s ball is whipped in and Evra gets on the end of it but is superbly denied by the sprawling Valdez.

21.42: Yellow Card: Arbeloa. Who holds back Menez and gives France a free kick in a good area…

21.37: Brilliance from Ribery as he beats Pique to win the throw in an advanced position. Koscielny shows pace as he stops a counter-attacking Navas. Certainly positives here for France.

21.34: RED CARD: POGBA. 2 yellow cards in the space of a minute equal red for the youngster who had be playing superbly until now. Shame, but game is over you’d think.

21.34: Yellow Card: Fabregas. Only seconds after coming onto the field, Fabregas is booked for time wasting.

21.31: CHANCE: A scrappy corner as the ball falls to Varane, but he is unable to adjust his footing in time and Spain recuperate a goal kick. French really behind their team though.

21.29: Valbuena’s corner is underhit and Menez can only head it over the bar. France need some spark here.

21.27: Navas is causing Evra problem after problem down the right flank. Worrying for Les Bleus.

21.26: Xavi’s free kick hits the wall. Menez is on for Cabaye for Deschamps.

21.24: Spain starting to frustrate France as tiki-taka is now in full swing. Blaise Matuidi has given away a free kick in a dangerous position and is consequentially booked.

21.20: CHANCE: Down the other end it is Ribery with an excellent run and his cut back find Matuidi who powers it into the palms of Victor Valdes.

21.19: CHANCE: Unbelievable miss from Pedro as the ball is centred by Jesus Navas. Should have been the second and good night.

21.18: As it stands, Spain will top Group I by just the one point with 3 games to go. Cabaye with a hopeless shot from range.

21.16: Substitution for Spain: Jesus Navas on for David Villa.

21.14: GOAL SPAIN: Pedro tucks away most untidily but he doesn’t care. Mistake from Jallet as Nacho Monreal plays the ball through. 0-1.

21.14: CHANCE: Benzema gets a head to Valbuena’s free kick but it goes wide.

21.12: Pedro fouls by kicking Ribery. Unimpressive to say the least. Impressive build up from France.

21.11: CHANCE: Unbelievable save from Hugo Lloris to deny a pot shot from Andres Iniesta.

21.10: Yohan Cabaye goes in the book for a late challenge on Busquets. Will miss France’s next qualifier.

21.09: France given a good chance from a Valbuena cross before Spain have a weak appeal for a penalty ignored.

21.05: An off the ball incident between Ribery and Arbeloa causes the game to halt.

21.03: Fairly controlling start to this second half made by Spain. Have come out of the blocks with intent.

21.01: French are back out as well. Really looking forward to this second half.

HT: France 0-0 Spain: A really enthralling contest, both sides with chances to take the lead, but Ribery will be kicking himself for missing the best chance of the game when he was slipt through by Valbuena. Spanish players still arguing with the referee over the lack of a penalty they feel should have been given for Lloris’ foul on Pedro. They have a point in fairness. France would remain 2 points clear in the WC Qualifying Group I if the score remains this way. Generally, Spain have had difficulties implementing their tiki-taca football onto the game. Xavi missed a sitter too.

20.44: Mathieu Valbuena is down holding his leg after an aggressive tussle with Monreal.

20.42: Terrible free kick from Xavi as Evra is rightly penalised for a shirt pull.

20.41: A lovely spell this for France. Real joy to watch them arguably playing their best football for 6 years here.

20:38: CHANCE: Absolutely fantastic chance for Ribery as a long ball from Valbuena is played over the top and the Bayern man beats Pique but pushes the ball to close to Valdes who gets a vital touch on the ball to stop it going into the back of the net. Chance of the game so far.

20.36: Christophe Jallet has been impressive today with the interventions he has made, but still looks the most likely to make a mistake. If that makes sense.

20.35: Stupid, stupid header by Benzema who headed the ball miles back to try and find Evra, but the Frenchman miscued his touch and David Villa was in on the far right, but the shot went wide.

20.33: Spain clearly not happy about the decision to give a penalty. Have quickened the tempo here.

20.31: CONTROVERSY! Spain should have had a penalty after Lloris dived in on him the penalty area, but the referee decides to give absolutely nothing.

20.28: Jallet and Benzema consistently linking up well it would appear. The former hasjust given away a free kick for stopping Iniesta in his tracks.

20.25: Crunching tackle from Matuidi on Busquets culminates in nothing more than a telling off from the referee.

20.24: Benzema’s lack of want to track back defensively may cause France problems.

20.22: Disconcerting for France the lack of coherence the midfield 3 is currently showing when they are being forced to defend. Another Spain move only breaks down after a poor shot from Pedro.

20.20: Another promising attack from France breaks down after initially good play from Benzema is thwarted when he miscues his control.

20.19: Newcastle’s Graham Carr is present tonight to watch targets such as Sakho we understand.

20.17: Amateurish defending from the midfield 3 for France who all decide to press at the same time, giving Xabi Alonso a chance to find Xavi who fires just wide. Bit of a scare there.

20.14: Great initial ball from Cabaye to find Jallet in loads of space, provides a cut back for Benzema who’s effort is wayward.

20.13: Some dodgy linesman-ing as Benzema is called offside from a thrown-in. Which is impossible.

20.10: Vincente Del Bosque is the only manager in the history of the game to have won the Champions League, World Cup and the Euros.

20.08: Lovely link up play from Cabaye, Valbuena and Benzema results in a French corner which is wasted.

20.07: Very casual from Spain at the moment. Failing to string more than 3 or 4 passes together.

20.04: WHAT A MISS FROM XAVI: Monreal was played in as Jallet failed to pick him up, the ball was put straight in and Xavi misses the goal from 3 yards out. Unbelievable.

20.03: Cabaye gives away the 1st free kick of the match with a stupid push.

20.01: Benzema manages to pick up on a Spanish mistake to win the corner. Earlier Jallet lost the ball poorly. Spain will get their joy down the wings tonight you feel. Pogba playing the deepest of the 3 midfielders.

20.00: France immediately push and a speculative overhead kick from Valbuena goes miles over.

19.57: Every single French player belting out the national anthem there. Nearly ready to go!

19.52: Cries of Allez les Bleus around the stadium. A massive French shirt is on the pitch at the moment. Can’t say I know what that is all about.

19.50: Some of France’s best moments being shown on the big screen here in the Stade de France. Excitement certainly building here.

19.26: Deschamps goes with the presumed 4-3-3 formation and makes two big calls. Playing both Varane and Pogba. Matuidi expected to play the deepest of the midfield trio and Valbuena is pushed out to the right. The key to success for France will be if Ribery can exploit the obvious frailties of full back Arbeloa. Mamadou Sakho misses out. Deschamps also keeps faith in Benzema despite his woeful performances in a French shirt of late.

19.25: So as the Stade de France begins to fill up, a bit of analysis on the starting XI’s to come.

19.00: STAT: France have conceded 5 penalties in their last 4 games vs Spain.

19.00: STAT: Mathieu Valbuena has scored 3 goals and provided 2 assists in the last 3 games for France. In form.

19.00: STAT: Nacho Monreal is the only Spanish player who does not play for either Real Madrid nor Barcelona in their starting XI tonight.

19.00: STAT: France have lost just 1 of their last 8 competitive encounters vs Spain.

19.00: STAT: Spain have not once been behind in their last 13 games in all competitions.

19.00: STAT: Xabi Alonso and Sergio Ramos have scored the last 4 goals for Spain vs France.

Mamadou Sakho: Why PSG Must Not Let Him Go