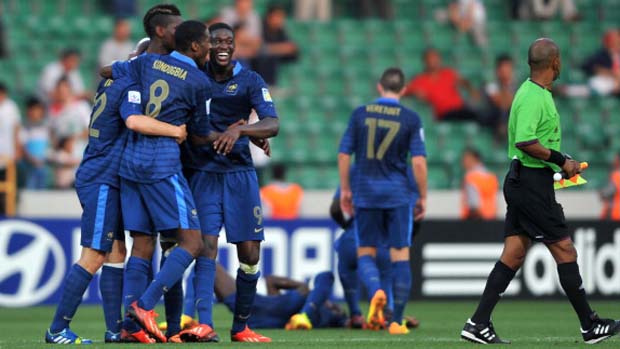 Join us at 19:00 for this encounter where a highly talented French side take on Uruguay. All the latest updates and analysis right here:

France very poor on the night but on the whole tournament, they deserve to win this. A very talented French side. Many of those here will go on to big things. I can promise you that. Areola the hero and must be man of the match.

WE GO TO PENALTIES

119′  Avenatti is slipped through, but Areola is down to smother. The PSG keeper has been very impressive tonight

115′ Polomat of St Etienne comes on for Lucas Digne who has gone down with cramp and is now unable to continue.

112′ Axel Ngando comes on for France, but for some reason its for Bosetti, who has come on in this match. He looks as confused as all of us. He has not played badly either.

108′ Kondogbia wins the ball on the edge of his own box, but a free-kick is given against him! The shot can only hit the wall though

105′ The second half in extra time is under way

HT in Extra time. Uruguay have been the better side in this first 15 minute period. France very poor. You would have to put money on that it is going to penalties in all honesty.

102′  Avenatti is played forward and forces Areola to make another brilliant save. Turns out that he is offside though

97′ France have been under par tonight, but one man who has impressed is Foulquier, who has bombed forward from right back on numerous occassions and provided some intent.

95′ Kondogbia once again tries to charge forward, but Uruguay have been very strong defensively and it has been cut out.

93′ Veretout in the book now for a poor challenge

91′ We are under way in extra time

FT: 0-0: We are heading to extra time. France very very poor so far and have not done extra time so far this competition, but they do have two substitutions left to make this game, compared to Uruguay’s one. You would expect that change to be Bordeaux’s Diego Rolan coming on in all probability. Uruguay have already been to Extra time twice this tournament. Will that work in their favour?

90+1′ Sanogo has been very poor tonight as after a poor bit of control, he fires the ball way over the crossbar.

90′ We are into added time here and appear to be heading to Extra time. 3 additional minutes

85′ A good run across the field by Foulquier results in the ball being cut back for Veretout whose curling effort forces a brilliant save from De Amores. The keeper makes another great save at close range from the resulting corner as Bosetti fires one straight at him.

80′ Big Chance for Uruguay as Avenatti is slipped through into plenty of space, but Areola comes out and makes himself big and blocks it.

78′ A lovely free-kick routine plays Digne into space, but his shot is blocked wide. The resulting corner is headed down dangerously by Kondogbia, but smothered by De Amores.

76′ Cristoforo stops Thauvin in his tracks as he was darting forward and is booked. Thats much better from the Lille man, who is starting to show some intent.

73′ Thauvin puts the ball over to the back post to Bosetti (who should debatably be off the pitch), who tries an audacious volley, which sails over the bar

70′ Uruguay change. Laxalt off and De Arrascaeta comes on for the South Americans

68′ Bosetti decides to take an off the ball swipe at Gimenez. Utter stupidity, but the referee didn’t see it.

66′ Ball played over the top of Sarr who completely loses track of his man and Lopez finds him in space, but he waits too long and is closed down before firing a shot well wide. Should have done better. Sarr continues to look like the weak link of this French side.

64′ Bahebeck is now coming off. Has been very poor so far. Nice man Bosetti comes on for him

61′ Paul Pogba gets booked for dissent. France looking down and annoyed at the moment. Bahebeck also holding his hamstring. Looks like he will come off, but he is staying on for the moment. Strange.

58′ Lopez, who has been the most dangerous for Uruguay so far, finds some space on the edge of the box, but the ball catches the wind a floats wide.

54′ Lopez puts a ball into the France box, which is booted away for Bahebeck on the break. Once again, there is no end product though and the ball trickles through to the keeper.

51′ We have a flat ball here after Kondogbia went in for a tackle. It has now been replaced. Pretty much the highlight of this game so far in all honesty

45′ We are back underway here for another 45 minutes and then more if extra time and possibly penalties are needed.

STAT: France with 63% of the possession in this first half, but have had less shots thus far

HT: France U20s 0-0 Uruguay U20s: France have been poor so far. Bahebeck and Sanogo have gone out of the game these last 20 minutes and Uruguay have come into it. Sarr and Areola look nervous as well and Lopez dangerous for Uruguay. All to play for in the second half though after a lack of chances thus far.

45′ Areola looking very nervous at balls which are being played into the box as he fails to deal with a corner and it needs a clearance from Digne to deal with it.

42′ Uruguay with the better chances so far as the ball is played into the box and requires a good header away. Another chance from the resulting corner sees Digne come to the rescue this time.

34′ Velazquez booked for a poor tackle on Sanogo. The Arsenal youngster in some pain on the floor. Is now back up and limping slightly

31′ Thauvin twisting and turning on the edge of the box breaks free of three defenders, but the shot is deflected wide. The Corner results in another one

27′ Sanogo has gone out of the game these last ten minutes. Thauvin tries a shot from the edge of the box and the new Arsenal man is slow to react. He just looks a bit clumsy and flat-footed at the moment.

25′ You feel like this match still has not settled properly yet. Both teams look fairly nervous at the moment. It is the biggest occasion in their career for most of the players out there, but that is where you would expect France to succeed as they do have more experience

20′ Sarr tries a header back to his keeper, but Lopez reads the situation and steals in. He only pokes the ball too close the Areola though who is able to push it wide. First really chance for either team. Sarr looked nervous there.

16′ Uruguay man Cristoforo takes a shot from a way out after the ball was headed back to him, but it floats well over the crossbar.

14′ A lovely break from France is switched across the pitch to Thauvin, who is only able to blast the ball over from a tight angle. Good play though from France. Kondogbia and Pogba dominating in the middle of the park.

10′ Sanogo and Thauvin linking up nicely here, but the final ball from Thauvin is too long and De Amores gathers easily.

8′ Pogba wins the ball back after losing it in the opposition half and finds himself in plenty of space. He tries to curl an effort into the corner though, which only finds De Amores’ gloves

7′ Thauvin and Sanogo try a cheeky one-two on the edge of the box but its been cut out. Sanogo has looked reasonably threatening so far.

5′ Lopez hits a poor effort straight at Areola. Both teams looking a bit nervous at the moment. Possession being switched the whole time.

4′ Sanogo wastes an opportunity from a way out. A volley goes way wide.

3′ Sanogo clearly once again being used as a target man here for France. Looking to bring down long balls played up to him due to his height and strength.

1′ Kurt Zouma wins a freekick on the edge of his own box for a push on him. Could have gone either way.

0′ The match is underway

Roberto Garcia of Mexico will be in charge of proceedings tonight

STAT: A double from Yaya Sanogo tonight will see him take home the top scorer’s award by himself. One goal with see him tied top with three other players

France name an unchanged side from the team that beat Ghana in the semi-finals, apart from Sarr replacing Umtiti, which is a forced change as the Lyon defender was sent of in the previous match.