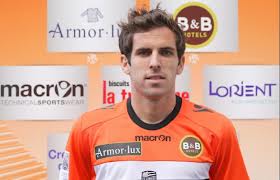 Lorient President Loic Fery has revealed that the club has accepted an offer for one of his players, increasing speculation as to who it might be:

The majority of the French media outlets believe it could well be central midfielder Benjamin Corgnet who is on his way out. The player has been strongly linked with Saint Etienne over the last few weeks and Les Verts expert Dylan Dusart understands that ‘Corgnet is 99% a Saint Etienne player.’

However, the transfer still seems nonsensical from a Saint Etienne point of view. Why sign another central midfielder when Joshua Guilavogui and Jeremy Clement performed more than acceptably well last season?

The other possibility is that winger Yann Jouffre will sign for Nantes. Television channel France 3 claimed yesterday (9th July 2013) that the player was close to joining Les Canaris after a season of frustration with Lorient last season.

In truth, these are the only realistic possibilities as Loic Fery stressed when he announced the news via social networking platform Twitter that the player had been given the right to leave the club.