Around three months ago, I wrote a similar article on this very player concerning his future and how he was likely to go to Newcastle. As we all saw, however, after a dramatic turn of events, Loic signed for QPR as he claimed that they had a better ‘project’ and more open stance than Newcastle. The move had not worked out, however. As much as Loic’s form has improved dramatically, and this has been rewarded with a recall to the national team, QPR Will be playing in the Championship next year and in all likelyhood, Remy will not be there with them. He has a release clause of around £6.5 million, which is unlikely to deter possible suitors. In this article, we look at where the future lies for the Frenchman.

When Remy arrived at Loftus Road, Redknapp talked about QPR being a stepping stone for Remy in enabling him to gain a move to a bigger club. Remy himself did not fill the fans with hope of the move being long term, when in his first press conference, he talked about how he would sit down with is agent and the board and discuss his future at the end of the season. The reality is that Remy is too good to be playing the likes of Scunthorpe every weekend and why would he want to play there when clubs of a much higher pedigree are interested. The impression has been given over recent weeks that the player is playing for his future rather than the teams and Remy feels that if he plays well, he can attract the interest he wants by the end of the season.

Maybe I am being too harsh. Loic has indeed scored some vital goals so far this season which kept QPR’s survival hopes just about alive for much longer than they would have been without him. When Remy arrived at the club, he was promised that Yann M’Vila, a Fellow French international and Remy’s friend would come. This did not happen and so Remy did come to QPR under misguided hopes for the future. The idea of the Frenchman “only coming for the money” has been a regular one, voiced particularly by disgruntled Newcastle fans, but in all fairness to the player, he has worked his socks off every weekend and whether playing for the team or for himself, you can not argue with a return of a goal every one and a half games.

So where will he go?

Well in all honesty it is unknown, but his recent form has drummed up some significant interest and here is a list of options that Remy could have at the end of the season:

Inter Milan: The only club where significant interest in the player had been confirmed. The club are even rumoured to have made a late bid for the player in January, but it was turned down by Marseille. The club are said to still want the player. Inter are an ageing team that need an injection of pace and creativity in the attacking third and Remy will be able to provide that. Inter Milan are definitely not the force that they once were, however, and Remy may receive offers from higher pedigree clubs. The Ex-Marseille man may also prefer to stay put in England having moved to the country so recently. That brings ourselves nicely onto our second possible option:

Arsenal: This is a favourite of the British tabloids, for one main reason. Having watched Remy for many years now, it is clear that he has many aspects similar with the great Theirry Henry. Remy is fast, French, likes to cut inside onto his right, runs in behind defenders and has a similar sort of build to the Ex-Arsenal man. Now I am not saying that Remy is even in the same league as Henry, but neither is the Arsenal team of the modern day compared with the Invincibles during Henry’s peak. Loic Remy could be the sort of player that fits in nicely at Arsenal and brings back elements of the more successful era. Wenger, however, (presuming that he is still in charge next season) has never been a fan of players with big egos. Remy would need to somehow prove to him that he did not go to QPR for himself, but would respect the team at Arsenal. This is all merely speculation for the moment, but in my opinion, Loic Remy would not be a bad signing for the Gooners at all. Arsenal scouts are rumoured to have watched Remy in their game against Reading on the day they went down.

Newcastle: Once again there has been no contact between the two clubs, but as we all know, Loic Remy would not have exactly been top of Alan Pardew’s Easter egg list. The player was just hours away from completing a move to Newcastle and the medical staff were getting ready to give the player a medical when he performed a last minute U-Turn and opted for London ahead of Tyneside. Newcastle still need a striker, however and with Aubameyang looking more likely to go elsewhere, Remy, we can reveal, is an option that Pardew is seriously considering. During Janaury, I highlighted to you three replacements for Demba Ba from Ligue 1, in Remy, Aubameyang and Gouffran and Newcastle made bids/showed a very strong interest in all three of them. The reality is that even with Graham Carr appearing to set up a permanent residence in France, there are no strikers apart from Aubameyang that Newcastle have shown an interest in thus far. It does depend on whether the ‘Toon Army’ is willing to forgive the striker or whether wounds are still too deep. Newcastle have since ruled out a move for the player, but if Aubameyang moves elsewhere, they might be attracted back to this one.

Aston Villa: Another side being linked with the player, but Remy talked about moving on to higher things and with their Premier League future in doubt, I just can not see him being at Villa next season. 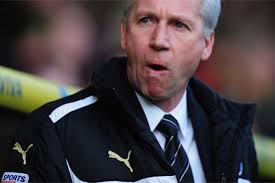 Alan Pardew was left dismayed at Remy’s decision to go to QPR, but he may get another chance to sign the player
[Via The Chronicle]

Whatever happens, it looks like it is going to be an interesting summer for Loic Remy.