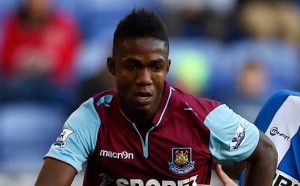 It is fair to say that Modibo Maiga did not make the best impact in his first season in London and it appears that West Ham would be willing to let him go out on loan. Nevertheless, Ligue 1 knows that he is a talented player and according to various reports, a loan deal to St Etienne is close.

Le Progres reported on Wednesday that the Malian international had agreed contract details for a move on loan to Les Verts, but Le Parisien, on the other hand claimed that a move was very unlikely as Maiga would be wanted for first team commitments for West Ham.

St Etienne’s President has also confirmed his side’s interest in the player, but made it no clearer if he thought that he could bring Maiga back to France: “Maiga is one of the options we have looked at, but there are other players. We will make a signing as soon as possible.”

The Daily Mail, however, despite not being the most reliable, report this morning that Maiga will move on loan to St Etienne for the season. Expect more to be revealed very soon.