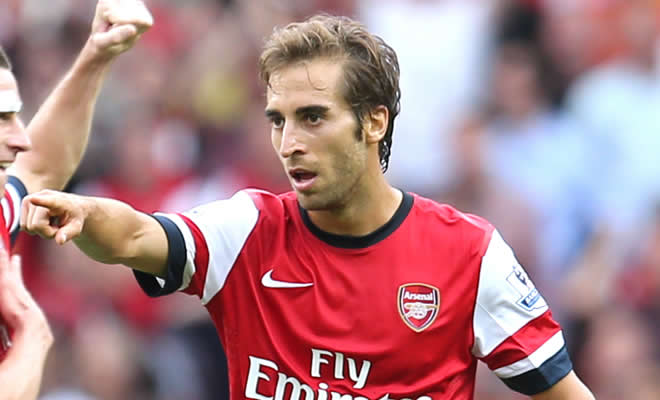 When Mathieu Flamini signed for Arsenal on a free transfer this summer, at a time when the fans were calling for big money moves, many Arsenal fans were underwhelmed. After all, Flamini, at 29 years old, was no longer a young player in football terms and had been released by AC Milan during the summer. Once Mesut Ozil signed for over £40 million Flamini was, in general, forgotten by Arsenal fans. Besides, who cared about an ageing free transfer when the club now had a new world-class superstar? How wrong we all were. Today, we take a look at the career of the defensive midfielder, and just why he is performing so well at Arsenal once again.

Flamini began his football career at home in Marseille, but after a string of excellent performances, Arsenal were knocking on the door. In the summer of 2004, Flamini signed for Arsenal for the first time, after declining Marseille’s contract offer, which he had allegedly already verbally agreed to. The Marseille manager at the time claimed: ‘He (Flamini) used me.’

For the next four years, Flamini fought for his position at the club. He was used largely as a utility player, filling in at full back and midfield when injuries gave him the chance to play. However, in the 2007/08 season of his first spell at Arsenal, he secured the starting defensive midfield role, and played the majority of Arsenal’s games. This was to be Flamini’s last season at Arsenal, or so it seemed…

Flamini signed for AC Milan in the summer of 2008, but his time at the club would prove to be less successful than his time at Arsenal. Not only was he largely used as a utility player, but he suffered a very serious injury to his knee, which kept him out for the whole 2011/12 season. Although he stayed at Milan for the 2012/13 season, he had to take a huge pay cut, and was released by the club in the summer of 2013.

So, it is understandable why many Arsenal fans were unimpressed by his signing. They were linked with the likes of Suarez and Higuain, so what use was a free agent who had played as a utility player for the last few seasons and was recently out for a whole year with an injury? What they did not realise was that Flamini gave Arsenal something they had been missing for years.

In Flamini, Arsenal now have the type of player they have missed since the departure of Alex Song to Barcelona. He is a player who will sit just in front of the back four and organise everyone else when the team is defending. He is not afraid to get dirty and ‘take one for the team,’ and adds some much needed physicality to the otherwise weak, although technical, Arsenal midfield. For Arsene Wenger, he has probably become the second name on the team sheet, after that of Aaron Ramsey, who has had an unbelievable start to the season.

Frankly, it is hard to leave Flamini out of the team of he is fit, and the statistics back up his importance to the club. At the time of writing, after the League Cup defeat to Chelsea, Arsenal have only lost 3 games in all competitions. These losses have all come when Flamini has not been playing. From a defensive point of view, when Flamini has played Arsenal have never conceded more than 1 goal in a game. During the games Flamini has not started, they have conceded more than one on 3 separate occasions. Flamini’s Arsenal record so far this season is: P7 W6 D1 L0. It’s hard to argue with that.

The question now is, if Arsenal had all of their players available, who would play the defensive midfield role? When Mikel Arteta was injured for the start of the season, Flamini played as a defensive midfielder in a 4-3-3 type formation, with the other two midfielders slightly in front of him. However, if both Arteta and Flamini were fit, I could see a 4-2-3-1 system, like the one Chelsea currently use, fitting Arsenal’s style of play. Flamini and Arteta could play in defensive midfield together – I think the combination of Flamini’s physicality and organisation could really compliment Arteta’s much more technical passing game.

Nobody can deny the fact that Arsenal have made an excellent start to the season, especially after that opening day defeat to Aston Villa. They went on a stunning run of 10 straight wins in all competitions, and many credit that largely to the arrival of Mesut Ozil. Although I cannot deny that this was clearly a huge factor, I would argue that just as big a part has been played by Arsenal’s unsung hero himself: Mathieu Flamini.