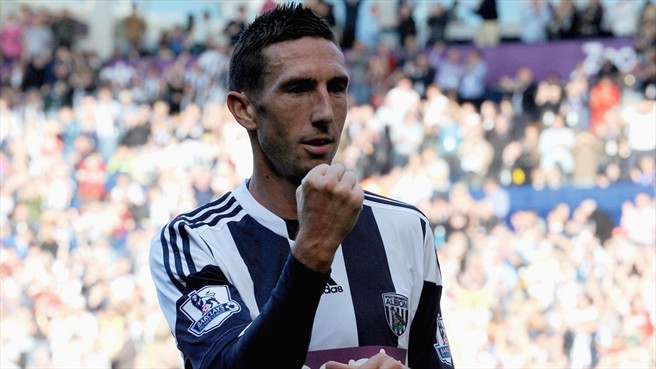 Finishing 8th in the Barclays Premier League in the 2012-2013 campaign, West Bromwich Albion attained their highest finish in the top tier of English football since 1978. Steve Clarke, who took over at the Hawthorns in 2012, has installed a belief in the squad and the club continues to develop under his leadership. The Baggies recruitment drive would be crucial as they looked to replicate their impressive achievement from last season. Their failure to re-sign Chelsea’s Romelu Lukaku on loan was disappointing, but Clarke managed to bring in players that would shore up the foundations of an already strong squad, as well as some skilful players that would allow the midlands club to attack with increased pace and poignance. Notable arrivals included Victor Anichebe, Stéphane Sessègnon and Nicolas Anelka. Another Frenchman to join the club was Morgan Amalfitano, whose impact on the Premier League has been somewhat emphatic since his cross-channel transfer.

Born 20th March 1985, Morgan Amalfitano began his professional playing career at CS Sedan and is the older brother of Newcastle and current Dijon loanee Romain Amalfitano. He spent five years at Les Sangliers and at the end of the 2008 season, joined FC Lorient. Amalfitano’s stint at the Brittany club lasted three years, scoring 14 times in 102 appearances. When his contract expired with Les Merlus, he signed a deal with Olympique Marseille that would run until 2015.

Managing only 58 appearances for l’OM, it was essential that Amalfitano looked for a new chapter in his career. On 1st September 2013, Amalfitano signed a season long loan deal with a view to a permanent transfer next summer. Deemed surplus to requirements at the Stade Vélodrome, Marseille felt that a loan move would prove beneficial to the former Lorient man, given that the arrivals of Dimitri Payet and Florian Thauvin meant that opportunities would be scarce for the Nice-born winger this season.

Amalfitano was on target for West Brom on his debut as they brushed aside Sunderland in a 3-0 win, making sure of the three points with a well placed driven effort. That win at home preceded a shock 2-1 win away at Manchester United, with Amalfitano scoring the first goal of the game with an incredible run from the halfway line; Racing past Rio Ferdinand, Amalfitano showed great composure as he staggered his run and chipped the ball over the onrushing David De Gea. Having hit the ground running in his first two appearances for his new club, Amalfitano’s fine form continued against the hugely impressive Arsenal. Claudio Yacob was situated perfectly to head in Amalfitano’s inch perfect cross, giving them the lead in a game that ended as a 1-1 draw.

With West Brom’s use of the 4-2-3-1 system, Amalfitano is deployed as a right winger. Due to the presence of Youssouf Mulumbu and the aforementioned Yacob in the holding midfield positions, Amalfitano is able to focus on his attacking movement. Nonetheless, he is perfectly capable of tracking back and lending a helping hand in his own half. He has the ability to move forward at pace and more often than not, he will look to take on a full back with the intention of delivering a cross or attempting an effort on goal of his own. The link up play between Amalfitano and Sessègnon has delivered instant results and looks as though it could be a key feature as they look to maintain their steady start to the 2013/14 campaign. Despite playing as a winger at present, Amalfitano is also able to play the role currently occupied by the former Sunderland man.

Amalfitano has featured for the French national side only once in his career. His debut for Les Bleus came in a 2-1 win in a friendly against Germany. He supplied the cross that was finished by Florent Malouda to give France their second goal. Should the Frenchman maintain such a rich vein of form, he could be considered for the national squad once again. However, with the abundance of wingers already in the France setup, the possibility of a call up looks unlikely.

After a blistering start to his career with West Bromwich Albion, Amalfitano is likely to have impressed supporters and club officials alike and the Midlands club may be tempted to make the signing permanent in January. Should a permanent switch to the Hawthorns not materialise, Amalfitano won’t be short of potential suitors. He is a player that doesn’t look out of place in the top tier of English football and with his future at Marseille looking as though it is over, a permanent move to England is on the cards.