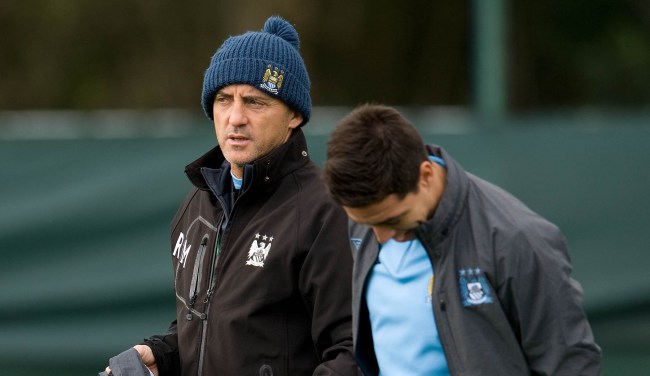 Frenchman Samir Nasri was predicted to be one of the greatest stars of French football for years to come. This did indeed look the case. After impressing greatly at Marseille, he joined Arsenal and Flourished. He earned himself a 25 million pound move to Manchester City and won the title in his first year. Now, however, it has all gone wrong for the 25 year old. He is out of favour with both Didier Deschamps in the National team and also, it as it now appears, his manager Roberto Mancini. The Frenchman looks set for a move:

The speculation all started when Mancini made comments about how Nasri was not working hard enough:

“Samir can do better than this year. He is a top player, but he has not been playing at his level. Samir has fantastic qualities. He should always play well. A player of this quality could be one of the best in Europe. But it’s not happening. If you are a top player, you know you can improve until the last day of your career. But sometimes you get players who think it is not important to work and this is their worst mistake. You win the title, you think it’s enough to play 50 per cent and you don’t arrive the next year.”

Since then tensions are said to have become very high between the pair and this, added to the fact that Nasri has only started 14 games in the league this season and has been subbed off early in most of them, has left the Frenchman looking for a way out.

Nasri on the bench for Manchester City. A common viewing point for the Frenchman this season.
[Via ‘The Mirror’]

City are said to be willing to sell and a number of clubs are interested. City, however, will not let the player go cheaply. They are said to want around 25 million euros, and Nasri will not want his wages to decrease one bit. This would therefore be a struggle for most clubs. Inter Milan are rumoured to being lining up at 20 million euro bid, and this would fall way short of the asking price.

PSG on the other hand do have this money to spend. Nasri is said to be one of their main targets for this summer, and our sources are reporting that Nasri’s entourage, including his father, have been contacted to discuss the possibility of moving back to France. The outcome of these conversations are yet to be known. We are only in the early stages, but the French press are reporting that PSG have a genuine interest to bring Nasri to the opposite end of the country from his days at Marseille. The problem is, however, that PSG currently have many players in his position already, such as Lavezzi, Lucas, Menez and Pastore, but with rumours circulating that Menez could be on his way out of Paris, and the quality that Nasri possesses on his day, I have no doubt, that the Frenchman could break into the Big Spenders’ first team.

A few days ago, however, Nasri’s agent did deny that the player would leave the club in the summer:

“Look at Ribery – a few years ago everyone wanted to throw him away. Nowadays Franck is the French team and a Bayern star because he worked hard and that is the way which Samir has to follow. He knows it and he will fight.”

Nasri’s future is still unclear therefore. His wage demands are a huge stumbling block and the player may want to stay and fight for his place. The fact remains, however, that if PSG came in with an offer above the 25 million euro mark, then both club and player would probably find it hard to refuse.

Nasri last in France, playing for Marseille (Via http://www.youtube.com/user/seby408)