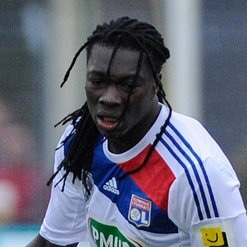 After months of speculation, it looks like we are coming to an end in the transfer saga of Bafetimbi Gomis. Lyon president Aulas has announced that a fee has been agreed with Newcastle and it is now over to contract discussions.

A move had looked close previously, but Newcastle had withdraw from talks as they were unwilling to pay a straight €10million fee for the player. The fee now agreed does add up to €10million but instead is €8million plus bonuses. Whether that is a new proposal from Newcastle or an idea coming from Lyon’s side is unknown.

A contract should not be too much of an issue with Gomis admitting that he had agreed a deal to come to Tyneside three weeks ago. The forward says there is little to sort out and by this, it is clear that he means agent fees, which Aulas highlighted as the only possible sticking point.

A move does look very close and Aulas has announced that he hopes that the deal will be tied up in the next 24/48 hours. Expect Gomis to fly to Newcastle soon to have a medical- we shall tell you when we have more news on that.

It looks as though Bafetimbi Gomis is set to become a Magpie.